Gibraltar is famous for the Barbary macaque which is quite distinct from the other macaque family. 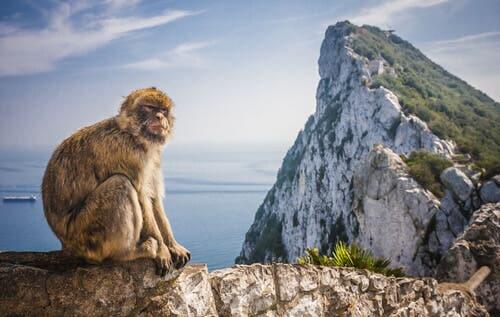 The Barbary macaque is a primate that inhabits parts of Asia, Africa, and Spain. It can be dangerous when it feels threatened and also due to a deadly disease they carry: herpesvirus B. This is because they can transmit it to humans. This species stands out for being able to adapt to all types of altitudes and temperatures that might range from below zero to over 100ºF

This monkey belongs to the genus Macaca. They occupy the second largest geographical area out of the whole genus of primates. This is an example of biological success because most of the macaques live in Asia.

The Barbary macaque resides in Africa and Gibraltar and is the exception within the macaques though. The scientific name of the species, Macaca Sylvanus, refers to the relationship this animal maintains with the forests of North Africa.

Characteristics of the Barbary macaque

This macaque is a medium-sized monkey that lacks a tail and has thick, cinnamon-colored fur. This allows them to withstand cold temperatures. Like most primates, they have nails and an opposable thumb. They also have a face that other members of the group can recognize.

Like many other primates, the Barbary macaques are omnivores, although a large part of their diet is plant-based. It includes leaves, herbs, and other parts of plants, as well as fruit, seeds, and even mushrooms, invertebrates, and small reptiles.

Their diet varies throughout the year though, especially when the fruit is scarce. Semi-free and captive populations often hunt squirrels and birds. Under human care, their diet is usually made up of vegetables and fruit, as well as legumes, mealworms, and some meat during the winter.

The Barbary macaque is a diurnal animal that lives in groups of up to 10 individuals, although there are usually 10 to 30 animals. It’s one of the species where the females rule – their social structure is matriarchal.

In fact, males greatly amuse themselves with the task of raising the younger macaques. They even hug several that aren’t necessarily their offspring. Researchers believe this is due to the fact that females, for centuries, have selected the males that make the best parents.

Macaques communicate through facial gestures and sounds. Note that both macaques and humans use facial expressions, although  our expressions are different from theirs.

When a Gibraltar macaque seems to be kissing or smiling – that is, showing all their teeth – it means something is bothering them. Many of these behavior patterns are a friendly way to warn others to turn around and leave them alone, otherwise they may attack.

The same is true for other primates, and so it’s important you don’t try to imitate them when you see them in a zoo, a sanctuary, or their natural habitat. This is because it’ll be the equivalent of provoking them. In fact, monkeys are among the animals that bite people the most.

All macaques live in Asia, except the Barbary macaque. It lived in many areas of Europe a long time ago, but it mainly inhabits Spain and the mountainous and forested areas of Morocco and Algeria now.

Cedar forests are their stronghold, in addition to the small town of Gibraltar. They’re one of the primates that has best adapted to a wide range of temperatures as they can live more than 6500 feet high. So, they can withstand sub-zero temperatures in winter, or hang out under the scorching sun of Africa, above 100ºF.

The main threats to the Barbary macaques are the destruction of their habitat and their exploitation as pets. You cannot legally have a monkey as a pet, but many are illegally captured in their habitat and sent to Europe.

The Barbary macaque is also very dangerous because it incubates deadly human diseases that don’t affect them, such as the B virus. In addition, they’re extremely strong and have enormous fangs that they’ll gladly use to defend themselves when feeling threatened. As you can see, Barbary macaques are at their best when in their natural habitat.

Current Events: The Macaque Crisis in India
Have you heard about the macaque crisis in India? These small primates have been terrorizing cities all over the country. Read on to learn more. Read more »
Link copied!
Interesting Articles
Invertebrates
Discover How Worms Reproduce