Discover the Condor, a Majestic Bird

They’re scavengers that are very large and fast, whose flight is spectacular, but that are in danger of extinction. They consume 11 pounds of meat in a single day, and can last 5 weeks without eating 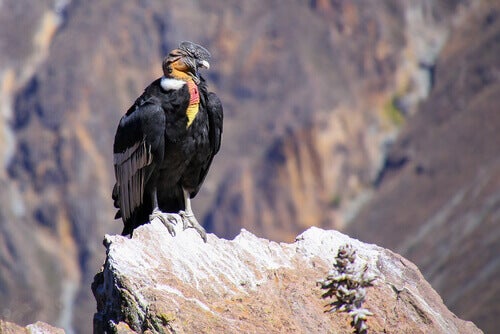 They’re native to the Andes Mountains and are truly majestic when flying. In this article, we’ll discover the Andean condor, native to South America, and the national symbol of many Latin American countries.

Discover the characteristics of the Andean condor

They’re the largest flying bird on the planet – only surpassed by the Southern royal albatross in terms of size. They can be as tall as 4.6 feet and males can weigh 33 pounds. Their wingspan is as large as 10 feet. That’s why they’re so impressive when flying!

A condor’s head doesn’t have feathers, but males have a tuft similar to cocks. Something rather peculiar is that they change in color according to their mood, going from a darker to a lighter red.

Both sexes have curved beaks with sharp edges, prehensile feet with little curved nails that allow them to grasp their prey, and that also help them walk between rocks and mountains.

Adults have black plumage with white parts on the backs of their wings and neck. The eyes are reddish and the face is featherless, but, as they age, they get ‘wrinkles’. Another curiosity of the condor is they barely make sounds due to atrophy in the syrinx, this bird’s vocal organs.

As its name suggests, the Andean condor lives in the vicinity of the Andes mountain range, from Venezuela to Tierra del Fuego in Argentina. One of the largest territories inhabited by this bird is the Colca Canyon, south Peru.

The area with the biggest dispersion of this species is Patagonia and Pampa in Argentina, as well as in the Andean region that this country shares with Chile.

It’s one of the birds that can fly at higher altitudes, meaning they take advantage of the rising thermal currents of warm air. They fly as high as 1640 feet and glide for miles hardly moving their extended wings, reducing energy consumption, and going further.

As for its feeding, they’re scavengers in every sense of the word. As soon as they discover a carcass, they’ll hover over it, sometimes for two days. First, they eat the soft parts, then they use their strong beaks to tear the body. Condors eat up to eleven pounds of meat in a single day, then go without food for five weeks.

They live in groups known as ‘roosts’, that live in the highest parts of the mountains and cliffs, to shelter from wind, rain, and predators. Both adults and the young alike use these shelters to sleep, and they’re difficult to find.

When it comes to reproduction, they’re monogamous – like most birds of prey– meaning that once they become a couple at three years old, they remain in that “relationship” all their lives.

They use caves or rocky walls to build nests and in each season the female lays a single egg, which both parents incubate for almost two months. Once the chick is born they feed it regurgitated meat. After six months, the young try to take its first ‘steps’ out of the nest.

The chick stays with its parents for 18 months, then challenges other chicks for its place in the roost.

The Andean condor, sometimes confused with the vulture, is considered an almost threatened species due to low reproduction rates. There are conservation projects for them to be born in captivity. However, it’s still not possible to speak of success because the process can take several years.

Finally, condors are birds filled with mystery and symbolism. The Incas believed it was immortal and Andean tribes were sure that it helped the sun rise each morning. It appears in the coat of arms of Bolivia, Colombia, Chile, and Ecuador and the logo of Argentine airlines.

Monogamy in the Animal Kingdom
Perhaps you know some animals that stay loyal to their partner all their lives. In the animal kingdom, monogamy is more a question of survival. Read more »
Link copied!
Interesting Articles
Birds
The Bali Myna: A Beautiful Critically Endangered Bird