It's a Hard Life for the Emperor Penguin!

The emperor penguin is the heaviest and tallest of its kind. They're native of the Antarctic continent. 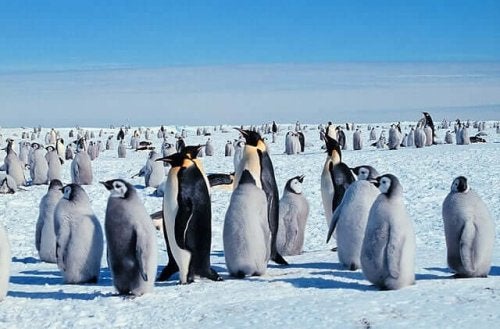 Penguins are members of the Spheniscidae family. The habitat of these flightless sea birds generally extends over the southern hemisphere. The emperor penguin is the largest one of all and also the most common one in popular culture.

Life in the harshest place on Earth

How would you fare on the coldest continent on the planet with extreme temperatures of even less than -58°F in winter? Antarctica is one of the most inhospitable places on Earth. Fortunately for the emperor penguin, they’ve been able to cope with the circumstances thanks to their psychological adaptation techniques and collaborative behavior.

This species has large colonies and has a community where it reproduces. Also, they keep their congeners warm and follow an interesting system of rotation in which the individuals take turns to change positions.

Thus, the penguin closest to the outside (the most exposed one) moves to the center of the circle until it warms up again and then trades position with the next in line. In order to interact with each other, they use a series of vocalizations that the scientific community is still studying.

Emperor penguins spend most of their lives on the Antarctic ice and they spend their days outdoors during the harsh winter. They even breed outdoors. The female’s job is limited to laying an egg and then it’s up to the male to incubate it and subsequently hatch it.

The mother then begins a hard and arduous journey to obtain the food she needs to support her family. She might travel up to 50 miles and, once in the open sea, will hunt fish, squid, and krill. Once there, she’ll dive down to nearly 2000 feet and won’t resurface for 20 minutes.

The penguin is a monogamous species and will only have one partner throughout their life. They’re faithful that partner, and will only reproduce with them. Strangely enough, the female is the hunter in this relationship. The male patiently waits for her outdoors either incubating their egg or raising their chick.

Over the course of two months, the male doesn’t eat and is completely dependent on his partner to return home. The female returns with a full stomach but it’s only to feed her young. This is when the male goes to the sea to find food to feed himself.

The emperor penguin and climate change

In early 2017, thousands of young Adelie penguins died from climate change-related causes. These birds, located in Eastern Antarctica, have the same feeding and breeding habits as the emperor penguin.

The journal Nature Climate Change published a study predicting a dramatic decline in the emperor penguin population. Before the end of the century, two-thirds of the colonies of this species will suffer a decline of more than 50%.

But what lies behind such catastrophic data? According to the Woods Hole Oceanographic Institution (WHOI), the emperor and Adelie penguin both depend on the thickness of the sea ice.

The climate models of the Intergovernmental Panel on Climate Change (IPCC) aren’t too promising. Any change in the ice, however small, can be catastrophic. This is because the thicker it is, the further the females must travel to find food.

In this case, there’s a risk that the mass Adelie penguin deaths will happen again and that thousands of their youngsters will die of hunger. In addition, a thinner ice sheet can also destroy the habitat of krill, one of the pillars of their diet.

What do countries and NGOs think?

For all these reasons, the charity World Wildlife Fund for Nature (WWF) called for the creation of a marine protected area in East Antarctica. The reason is a hypothetical opening of this area for krill fishing that would further deplete their food resources.

Even though Australia and the European Union have been insisting for eight years, there still isn’t such an area. Once again, the change in temperature threatens to wipe out the rich biodiversity of our planet, and the hard life of the emperor penguin will continue to be so.

The Fairy Penguin: The Smallest Penguin in the World
If you ever find yourself on the coast of Australia or New Zealand, you might just spot one of the region's cutest inhabitants: the fairy penguin. Read more »
Link copied!
Interesting Articles
Birds
Discover 5 Different Types of Owls