These songs recall moments in childhood or relationships doomed by circumstances; they also represent freedom or simply describe the song or flight of a particular species of bird. 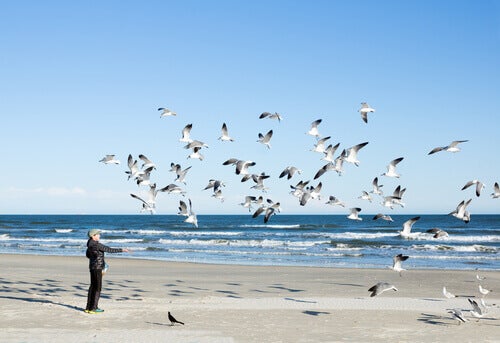 The animal kingdom has been a source of inspiration for artists since time immemorial. In this article we’ll take you on a journey through some beautiful songs dedicated to birds.

A selection of songs dedicated to birds

Humans have used birds as a metaphor to talk about themselves throughout history. Sometimes songwriters relate a memory of childhood or of a lost love; other times the bird is a symbol of freedom. And of course, sometimes the song is simply a poetic description of the bird, including its flight or its song.

Below you’ll find a varied selection of songs with distinct points of view by artists from different places and periods. We hope you enjoy it.

Later on, the Catalan singer-songwriter laments: “I was left alone, / digging on the ground, / looking for my childhood, / it will never come back, / they left it behind, / under the sand, near the sea, / next to some rocks / that don’t know how to fly, / like my seagulls”.

Many different things inspire artists when creating musical works. Here we show you a selection of songs dedicated to birds.

Half a century ago Paul McCartney wrote this song, said to be inspired by the racial tensions that dominated the USA at that time. The song was included on the double album The Beatles, also known as The White Album.

“Blackbird singing in the dead of night, / Take these broken wings and learn to fly / (…) Blackbird, fly (…) / All your life / You have only waited for this moment to arise“. In fact, the Turdus merula that McCartney sings about has a sweet and melodious song that it sings at twilight.

Also black, but with purple and green flecks, the Ptiloxena atroviolacea is a bird endemic to Cuba. Silvio Rodríguez dedicated a song to it, which opens the album Expedición, released in 2002.

Listen to this inspired creation by the great Cuban troubadour here.

Also known as the southern or Paraguayan bellbird, the Procnias nudicollis is the national bird of Paraguay. However, it’s an endangered species due to habitat loss and intensive hunting for the pet market.

The song of this bird, similar to the echo of a metallic clang, inspired a beautiful Paraguayan polka composed in the early years of the last century. Later popularized by Félix Pérez Cardozo, it was written by Carlos Talavera.

And although the instrumental versions with their enchanting harp sections stand out, the Argentine Eduardo Rayo wrote some beautiful lyrics: “Amazing bellbird / light that blooms on a branch / There it goes happy and brave / Your song is mine / Love and illusion with the sound / of your voice”.

This beautiful work by the multifaceted María Elena Walsh would have a place on any list of great songs dedicated to birds. Although the Argentinean is more famous for her children’s songs, she also made records aimed at an adult audience.

Endecha española is from the 1975 album El Buen Modo (The Right Way). Walsh mentions four birds and relates them to different Spanish cities. She tells of the pigeon that descends to Las Ramblas in Barcelona “with death on its wings”, and the stork that makes its nest on a bell tower in Valdepeñas.

She also refers to a seagull from San Fernando de Cádiz, and to the swallows that “will return dark / always to Seville“. You can listen to the version by the great Víctor Manuel here.

Some Great Pet-Inspired Songs You Never Knew About
Many tributes have been made to other people's beloved pets, and many pet-inspired songs that reach our souls were recorded... Read more »
Link copied!
Interesting Articles
Birds
The European Robin: A Bird with Charisma