Why Do We Call Gulls Sea Birds?

Are gulls sea birds? Most gulls live in coastal areas, while others live and eat on the mainland. Marine dwellers spend 95% of their lives flying over oceans, feeding on fish and invertebrates, as well as vegetables. However, when food is scarce they eat carrion. 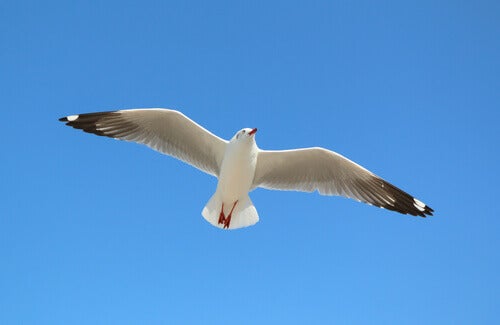 Gulls are sea birds that inhabit almost every continent and are very loved and popular all over the world. In fact, it’s very difficult to think of a gull anywhere else but flying over the immense blue sea. Today, we’ll see some reasons why these majestic birds are classed as sea birds.

Gulls have webbed feet and belong to the Laridae family. At present, more than 40 species of gulls are known to inhabit mostly the coasts of Europe and America. They have a compact, slender body, with long, strong wings. An adult gull usually measures between 10 and 30 inches measured from its beak to its tail.

Their beaks are strong and robust with shades of yellow or orange. It’s interesting to note that their elongated legs have a membrane that connects its webbed fingers and allows them to move over the water.

These birds experience various transformations in their plumage by the time they reach adulthood. Their feathers are predominantly white and gray, and they have small black spots on their wings or head.

The thickness of their plumage doesn’t allow them to take flight from a flat surface without the help of the wind, nor to dive into the water. However, their wings have a structure that’s perfect for gliding and they possess great agility during flight. Gulls don’t usually fly long distances or hunt at high altitudes, like hawks or eagles, although their characteristics would allow them to do so.

Why we say that gulls are sea birds

We’re used to associating the gulls with the sea, and, actually, most of the species live near the coast. As we mentioned, their body is designed to plane and move over the waters. These species can live up to 95% of their life flying over the oceans, occasionally coming to land to lay their eggs.

Despite being sea dwellers, there are also species of gulls that feed and nest on land, far from the sea. These rarer species usually reach the interior by following the courses of the rivers.

Currently, all species of gulls need to live in areas with good wind availability. Otherwise, they wouldn’t be able to take flight, their food would be threatened, and they would become vulnerable to possible predators. They’re found on all continents but live mainly along the American continent and on the coasts of European seas.

In addition, the gull is one of the birds that’s best adapted to living with humans. They’re able to live near ports, in artificial wetlands, ditches, channeled rivers, and even in areas with open garbage.

The diet of gulls

Like most birds, gulls maintain a very varied diet in their natural habitat. Their eating habits are rather opportunistic, and vary according to the availability of food, climate, or environment.

When gliding over seas and rivers, they usually catch fish, insects, mollusks, crustaceans, vegetables, and worms. In addition, they can also steal eggs off other birds that make their nests near the coast. The species that live inland can approach rivers to feed or look for nests in trees, rocks, or mountains.

When food is scarce, gulls may adopt scavenging habits, like those of vultures. In this way, they’ll feed on the remains left by another bird or some other predatory mammal.

The species that live near cities have adapted to human habits. They can take advantage of the waste from fishing activities in ports, and also consume the remains of human food. Sometimes, we see seagulls flying around near garbage dumps in big cities.

Although they may adopt solitary habits, they usually form colonies to protect themselves. They’re intelligent birds, which maintain a social structure and demonstrate a sophisticated system of communication. In addition, they’re territorial birds and the whole community is responsible for defending their environment.

During their breeding season, males and females gather on beaches, riverbeds, or marshes. Gulls are monogamous sea birds, staying with a single partner for their entire life, with whom they share the responsibility of caring for their chicks. They build simple nests, with branches and grass, usually in the cliffs near the sea.

White Stork Migration: Interesting Facts About These Birds
White stork migration has changed over the past year. But why? Let's take a look at this change and what it means for these birds. Read more »
Link copied!
Interesting Articles
Birds
Gray Parrots: An Endangered Species

Interesting Articles
Latest News
What Are the Indicators of Human Impact on the Environment?