Necrophages are animals that feed on carrion (the carcasses or remains of animals that have been abandoned by other predators). Therefore, they don't participate in hunting but instead play a key role in the ecosystem by leaving it free of decaying biomass. 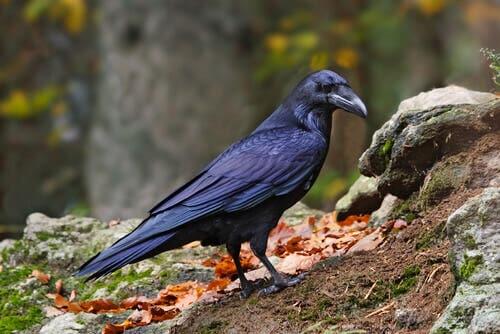 Carrion-eating animals or carrion feeders are characterized by feeding on corpses without participating in the hunting or killing of the animals. This means that they play an important role in the ecosystem, as they remove organic remains before they break down.

In this article, we’ll give you some information about some species with this particular style of eating.

Scavengers of this kind eat decaying biomass, hunted, or injured specimens, and individuals who have died of natural causes. Even if it doesn’t seem like it, they play a very important role in nature. We could say they are in charge of keeping the environment free of putrid and decaying matter. Examples of carrion animals include:

This species of corvid, the largest in its family, has a thick, strong beak capable of tearing the flesh of its prey. Ornithologists consider it one of the most ‘opportunistic’ animals in the animal kingdom, as it feeds on what others leave.

For example, if they live in urban areas, they’ll be close to garbage or landfills. If their habitat is somewhere nearby where roads are, their diet will consist of animals that have been run over by vehicles. In addition, if they live in the Alaskan tundra, they’ll eat caribou corpses or other bird remains.

In most cases, these birds of prey feed on dead animals. However, if for some reason they don’t find any carrion they do have the ability to hunt. They locate their food thanks to their powerful range view, which allows them to spot the carrion several kilometers away whether in open fields or non-wooded areas.

When they notice a corpse they can become quite aggressive with other animals that want to take the loot. Moreover, they use their thick beaks to rip skin and tendons, and their tongues to pull the flesh out.

These carrion-eating animals live in Africa and are also skilled hunters. Nevertheless, it all depends on the situation. The hyena eats several parts of the corpse except for the hair, hooves, and horns, as they can’t digest them properly.

We can also find scavenger animals in the sea. The Remora is such a fish, as it clings to sharks to take advantage of the leftovers after eating their prey. Moreover, they also avoid any predators by hanging on to them in this way as no one is encouraged to face an individual with teeth as sharp as their host.

This is another carrion-eating animal that can also be a hunter depending on the situation. The jackal is an animal of nocturnal and omnivorous habits whose diet consists of birds, reptiles, amphibians, and small dead mammals. In addition, people have seen them looking for spoils in garbage dumps.

This is an innate opportunist who bases its diet on anything that’s available, including carcasses and animal remains. However, they prefer fresh meat hunted by themselves. If they’re not able to hunt, they can feed on deer remains that are abandoned by larger predators.

Small in size and a nocturnal animal, this Australian ‘devil’ feeds on whatever it finds. In addition, its jaws and sharp teeth can devour prey in a matter of minutes (including bone and skin!). Occasionally, it can also feed on carcasses of cattle or pigs.

This is yet another nocturnal carrion-eating animal that will take advantage of everything it finds in its path. Be it worms, slugs, caterpillars, beetles, mushrooms, and fruits. Therefore, hedgehogs sure have a very varied diet.

However, the hedgehog doesn’t hunt. In fact, it finds its food by sniffing the ground. They usually consume animal remains before the hibernation season, when they must gain weight to withstand months without eating.

These crustaceans eat almost any type of fish, including starfish, snails, or sea urchins. They can also base their diet on eggs of other species and any dead organisms that ‘fall’ to the bottom of the sea.

As its name suggests, this small coleopter insect (which is no more than 40 millimeters in size) feeds on decaying animal carcasses. In addition, they can even bury dead invertebrates and then use them to feed their larvae.

Animals will never stop amazing us with their intriguing skills and habits. Do any carrion feeders live nearby where you are?

The Bearded Vulture: Characteristics, Behavior, and Habitat
Today we want to tell you about one of a kind animal that mates for life and survives on bone marrow. Continue reading to discover the bearded vulture. Read more »
Link copied!
Interesting Articles
Wild Animals
5 National Parks in Africa You Can't Miss