Walking Sharks: Sharks that Can Walk on Land

Walking sharks are several very particular species of sharks that have the ability to walk. Thes animals inhabit the waters of Australia and Indonesia. We'll tell you all about their discovery in the article to follow. 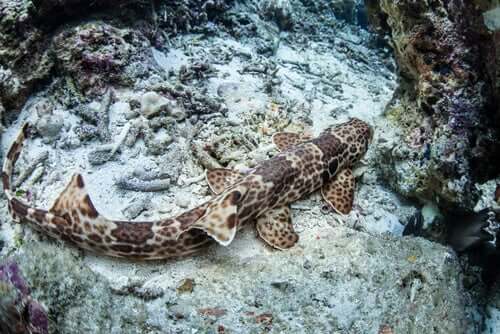 Sharks have been inhabiting our planet’s waters for hundreds of millions of years. During this long period of time, some species have changed due to evolution. However, a recent discovery was made, revealing some extraordinary species: walking sharks.

Perhaps you thought that there were no animals left to discover. But the truth is that the biodiversity of our planet continues to throw new surprises our way. Experts estimate that we have yet to identity approximately 86% of land species and 91 percent of marine species. We know very little about these marine animals since they’re very difficult to track.

This is why it’s so surprising when scientists do manage to discover and identify new species. And that’s the case with walking sharks. Currently, there are 9 known species of these animals, which inhabit the waters of New Guinea, northern Australia, and eastern Indonesia.

All of these species belong to the same genus, Hemiscyllium. The members of this family of shallow-water sharks spend their entire lives among the reefs.

Why are they considered walking sharks?

These sharks use their fins in order to “walk” along the rocky floors of tropical waters. Upon observing them, it’s evident that their movement is much more similar to walking than swimming.

Walking sharks move by using their front pectoral fins along with their back ventral fins. This allows them to walk slowly and ponderously along the sea floor. What’s more, they can even walk along coral reefs outside of the water when the tide is low. This mobility gives them an advantage over their prey during low tide, making them the main predators of the coral reef.

Walking sharks move from one puddle to the next in order to capture crabs, shrimp, and small fish, which are the main components of their diet.

Walking sharks are fairly small, measuring just over three feet long. Their bodies are slender and cylindrical, with a ventral mouth and a long tail. The pattern on their skin varies from one species to the next, combining white speckled spots with dark spots on their dorsal region.

Their ability to move around by walking and their capacity to live in environments with little oxygen makes them excellent predators. However, it’s important to point out that they’re inoffensive to human beings. Therefore, attacking walking sharks is completely unjustifiable.

The evolution of walking sharks

Sharks are animals that seem to have gotten stuck in time, as they’ve changed very little in the last 400 million years. Therefore, discovering this specialization is a unique event. The explanation may lie in their isolation in tropical waters where they spend their entire lives, barely venturing out to lay their eggs.

Experts believe that the different species of walking sharks evolved after moving away from their original population. In doing so, they became genetically isolated in new areas, and, after millions of years of evolution, they became new species.

Members of this shark genus are vulnerable according to the Red List of Endangered Species. However, scientists aren’t exactly sure of their situation given that they know very little about their biology.

The intensive fishing of walking sharks and their capture for aquariums are the main threats to these animal species. At the same time, the effects of climate change and the destruction of their habitat are other factors that influence their conservation.

The destruction of the habitat of walking sharks could seriously hurt these animals. Some of these species live only in very small areas and are indigenous to their current habitats.

It’s vital that we fight for the conservation of all of the biodiversity that we know today–even the parts we have yet to discover. That way, we can continue to enjoy its beauty and study animals in their natural habitat. Biodiversity enriches our planet and our lives.

5 Interesting Facts About Tropical Fish
Fish are remarkable creatures, they have been around for more than 450 million years. Tropical fish have evolved to adapt to their marine environment. Read more »
Link copied!
Interesting Articles
Mammals
The Golden Lion Tamarin: Between Threats and Benefactors