Few other eagle species are as numerous, though some species like the tawny eagle, wedge-tailed eagle and bald eagle have total estimated populations of a similar size to the golden eagle’s. 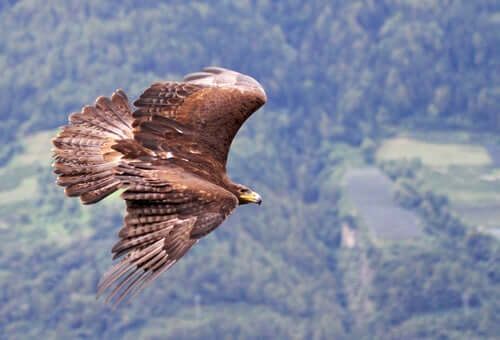 This bird of prey is one of the famous species and is widely present on the planet. It inhabits almost every continent! The golden eagle is so famous that it’s used as a symbol on many country flags, such as Mexico’s national flag. In this article, we’ll provide you with information about the characteristics, behavior, and habitat of a truly amazing animal.

Characteristics of the golden eagle

As with other birds of prey, golden eagle females are larger than males and their wingspan ranges from 5 ft 11 in to 7 ft 8 in wide.  In the largest subspecies (A. c. daphanea), males and females weigh typically 8.9 lb and 14.0 lb, respectively.

Their plumage coloration is dark brown with golden markings on the head and neck. Their shoulders and tails have white-colored feathers. In addition, their legs also have feathers, unlike other eagles.

The golden eagle as a symbol

Since ancient times, people have connected this bird with valor and strength. This is due to their flight speed and their hard-to-reach nests, usually built on cliffs. In both Greek and Roman mythologies, the royal eagle became the symbol of Zeus and Jupiter. These were the most powerful gods of the pantheon.

The golden eagle once represented the Roman Empire’s emblem and was also a religious and military symbol. When the Roman legion started marching, a soldier denominated “Aquilifer” would raise the eagle standard bearing a drawing of the bird.

It was later used in Byzantium, where it was portrayed as a two-headed eagle. One head representing the fallen empire and the other representing the new one. Charlemagne used this symbol as well, as did the Habsburg monarchy in the Middle Ages and many other noble families for their family crests.

The history of this eagle as a symbol continued with Napoleon’s First French Empire, whose coat of arms depicted a shield with a golden eagle in front of a blue background, clutching a thunderbolt in its talons.

The symbolism was also present in the Independence of the United States of America and appears in the national flags of Mexico and Albania. John the Evangelist, the author of the fourth gospel account, is symbolized by a golden eagle, often with a halo. In addition, this animal also appears in Germany’s coat of arms, as opposed to Nazism’s imperial eagle.

This bird’s habitat spreads through North America, Europe, Asia, and North Africa. However, biologists also have recorded sedentary eagle populations in Great Britain, Scotland, Norway, Italy, Japan, and the Alps. Hunters in Central Asia and the Middle East use the golden eagle for falconry and antelope hunting.

Today, we can find six subspecies according to their locations:

One of the main features of this bird is that it can adapt to any kind of ecosystem due to the fact that, if necessary, it will feed on carrion.

Therefore, it has been successful in maintaining a stable population number, unlike the imperial eagle (its closest relative), which depends on hunting rabbits to survive. Scientists don’t consider the golden eagle as an endangered species, although experts in Ireland have declared it extinct.

As for their diet, golden eagles hunt from up in the air making use of their strong, sharp claws and their powerful beaks. They have the advantage of a high point of view, which allows them to locate their prey from a considerable distance. In addition, they can catch animals of different sizes and shapes, including rabbits, foxes, mice, hares, snakes, ground birds, etc.

Golden eagles usually mate for life and the couples are formed in a courtship display. Moreover, their reproduction cycle is something worth noting: they typically build several eyries or bird nests within their territory and use them for several years. In dry or desert areas, they can build them between steep rocks and cliffs.

In addition, each season they add new floors to the nest, and it can measure up to 5 feet long. The mating season takes place between January and March and females can lay up to two eggs, which are then incubated for 45 days.

In the first 10 days, chicks mainly lie down on the nest under layers. The chicks are covered in white plumage and attempt their first flight at around 2 months of age.

After the eggs hatch, the eagle parents will give their attention to the strongest and healthiest chick as a priority. The other will often die from lack of food or from being expelled from the nest. Even though we may feel this is a cruel thing, this is their natural way of ensuring that only the fittest will survive.

Golden eagles live up to 38 years in the wild, and up to 50 years in zoos. In sum, this is certainly a stunning animal and a bird lover’s favorite! We hope you enjoyed learning about this magnificent bird today. Until next time!

The Conservation of Eagles in Spain
The conservation of eagles in Spain is one of the objectives of Spain's current goverment when it comes to preserving national natural patromony. Read more »
Link copied!
Interesting Articles
Birds
The Bali Myna: A Beautiful Critically Endangered Bird