The Macaw: A Very Intelligent Bird

Besides its beautiful appearance, the macaw possesses an astonishing intelligence. Sadly, it's one of the most endangered land birds in the world. 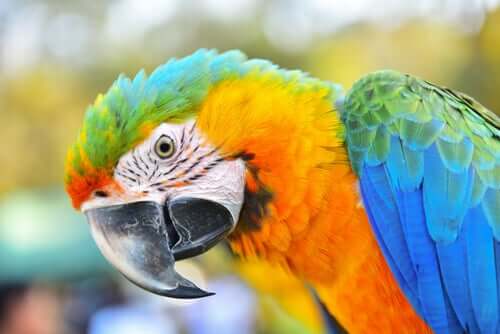 The macaw belongs to the Psittacidae family, which also includes parrots, parakeets, and cockatoos. Psittacidae are perhaps the most charismatic and most popular bird families on the planet.

Their charisma and the strong affection they inspire in humans have mainly to do with their great intelligence. It’s a well-known fact that these birds are able to solve problems and learn by experimentation. What’s more, it’s amazing to know that they can share the knowledge they obtain with other members of their species.

Physical characteristics of the macaw

The birds that belong to this family are a group of celebrated birds that are easy to recognized given their unmistakable hook-shaped beaks. Their multicolor feathers also set them apart from the crowd… They are predominantly green, with accent colors of red, yellow, blue, purple, and brown. Without a doubt, their bright colors help them blend in among the flowers and foliage of the trees that they live in.

Other characteristics that characterize Psittacidae are their vocalizations and their ability to imitate the voices of humans beings. This ability has made them very popular pets, given the empathy and endearment they produce.

In the Psittacidae group, they have two toes facing forward and two facing back. This characteristic allows them to manipulate tools in a similar way to primates.

The macaw has a slow development. In general, young macaws leave their home when they’re about 4 years old, which is when they reach sexual maturity. During this long period, their parents don’t lay any more eggs. This behavior pattern reflects the importance of all that young macaws have to learn from their parents.

What’s more, they live in complex social structures of up to 25 to 50 individuals. This is a very effective strategy when it comes to protecting themselves from predators. They also establish monogamous partnerships that last for life.

In addition, the macaw has a large head in proportion to its body weight. All of these characteristics mean that these birds meet all the prerequisites that correlate with the development of complex cognition.

The macaw can live in the wild for an average of 40 to 50 years. At the same time, those that live in captivity, under very attentive care, can live for up to 70 years.

Psittaciformes (parrots) have always been seen as the primates of the bird class. The proportion between their brain size and their bodies is clearly comparable to large apes.

Members of the parrot family not only manifest their intelligence through their ability to learn to imitate sounds. Some species, like the Kea (Nestor notabilis) also have a great capacity when it comes to using tools, much in the same way that large anthropomorphic mammals do.

What does science say about the macaw’s intelligence?

Currently, there’s an investigation group that carrying out research at Loro Parque (Parrot Park) in Tenerife, Spain. The group is studying the evolution of these birds’ complex cognition.

The laboratory has published a series of comparative studies, among which the report on their economic decision-making stands out.

It’s interesting to know that decision making refers to their capacity to ponder different beneficial alternatives and to choose the option that offers the greatest advantage.

Sometimes, this situation requires them to sacrifice their desire for immediate satisfaction. And this capacity is considered cognitively challenging. Not only does it require them to inhibit their impulses, but also to evaluate the expected results in order to decide if it’s worth waiting.

What does decision making in macaws consist of?

The experiments consisted of submitting the four macaw species to the task of exchanging tokens. First, researchers trained the birds to exchange three types of tokens for low, medium, and high-value food. They all learned to exchange the tokens in a determined order according to their value.

Later, the birds faced the situation of having to choose between low-value food and a token that they could exchange for better quality food. During trials, all of the species were able to decide economically, but only the large macaw species were able to surpass the others in one of the crucial tests.

The price of being a magnificent bird

Perhaps it’s their intelligence that attracts us to these amazing birds. But, sadly, the use of these birds as pets, along with the pressure caused by the destruction and transformation of their natural habitats have made them one of the bird families that’s at greater risk of extinction.

In fact, nearly half of the macaw species have already become extinct. The Ara genius, to which macaws belong, have some thirteen recognized species–six of which are already in extinction. Specialists agree that the continuation of the illegal trafficking of these birds as pets will lead to the disappearance of the entire genus from its natural habitat within the next ten years.

What to Consider When Choosing a Bird as a Pet
If you're you're in the process of choosing a bird to have as a pet in your home, keep reading to discover what you need to consider first. Read more »
Link copied!
Interesting Articles
Birds
Differences between Black and White Swans