The Woodpecker: One of Nature's Hardest Workers

This bird, who you might know from Woody the Woodpecker cartoons, drills in wood in search of food. They are originally from Mexico, although you find them in Europe. You can also find them in Spain, in the Doñana Natural Park. 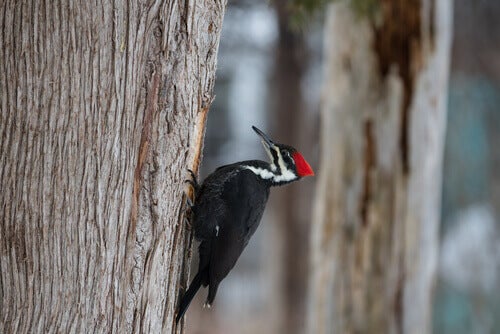 Undoubtedly, the woodpecker was a character that featured in many people’s childhood. Who can forget the peculiar laugh and all the adventures of “Woody Woodpecker”? However, far from being a crazy or mischievous animal, woodpeckers are actually tireless workers. Next, we’ll get to know a little more about this unique bird.

The woodpecker belongs to the Picidae or Piciformes family. They’re related to toucans, ostriches, and emus. Today, there are more than 200 species of woodpeckers in this family group.

The most famous and largest species of this bird inhabit North American and Europe. Alternatively, the smallest specimens mainly live in Africa. In fact, the smallest woodpecker in the world lives in the African jungle and is just three inches long.

Experts previously considered the Imperial Woodpecker, originally from Mexico, to be the largest woodpecker species. They exceeded 23 inches in length. However, experts believe that these birds became extinct in the 20th century due to indiscriminate deforestation.

The largest species currently known is the Great Slaty Woodpecker. They live in India and can measure up to 21 inches in length. They also weigh an average of 1.3 pounds. Then, in Europe, the largest is the Doñana Woodpecker, whose body usually measures 20 inches and weighs close to 1.1 pounds.

The special anatomy of the woodpecker

One of the significant elements of the woodpecker’s behavior is their habit of pecking at trees with their beaks. After performing this task with such force for so long, any other animal would die very quickly. However, the woodpecker’s anatomy is specially designed to withstand this arduous task.

Their skulls are extraordinarily hard to protect their brains. It’s precisely for this reason that these birds can repeatedly strike tree trunks without suffering concussion.

Their beaks are also reinforced to allow them to efficiently and safely work away at tree trunks. Woodpeckers have transparent membranes that line their beaks. These act as shock absorbers. For example, with each blow, the membranes trap air and form impact pockets, similar to car airbags.

The evolution of their features

Their beaks also have developed an extra protective layer made up of bones and tissues. This additional structure helps reduce the natural wear and tear of their beaks generated from the friction with the wood.

In addition, these birds have eyes with three rows of eyelids. This helps prevent retinal detachment. The design of their legs also allows them to grab on to tree trunks and have enough stability to strike the trunk with strong, precise blows.

Feeding habits of the woodpecker

Many people wonder why woodpeckers spend so much of their day hitting trees with their beaks. The answer is simple. This is how they get food. Their diet is comprised of larvae and worms that they find in the bark of trees.

To find their prey, woodpeckers place their ear to the tree trunk. Then, after identifying the movement of larvae and worms, the bird repeatedly strikes the tree. Once they have penetrated sufficiently into the tree bark, they catch their prey with their long tongues.

In fact, the woodpecker’s tongue is as long as half their body. They are among the few birds that have a retractable tongue, which we usually find only in amphibians.

In addition to their impressive size, these birds’ tongues have a very sticky texture and are very durable. This prevents the bird from injuring themselves when they place their tongue into the bark. It also allows them to easily trap their prey.

Woodpeckers have different courtship and reproduction habits depending on their species and habitat. Males are responsible for making holes in the trees where couples can build their nests. With the remains of sawdust and branches, they make small beds so that females can incubate eggs.

In addition, the well-known, striking plume on woodpeckers’ heads is a method of sexually attracting other birds. Females often choose males that have more beautiful, color, or clean feathers. As a result, males are generally better “adorned” than females.

Learn How to Identify a Bird Song From Home
Even in urban spaces, a bird song has always been part of our lives. However, between the sounds of traffic we have in our routines, we hardly notice them. Read more »
Link copied!
Interesting Articles
Birds
Diurnal Birds of Prey, Rulers of the Summits