Diurnal and Nocturnal Birds of Prey

These species have important similarities, especially in their behavior and ability when hunting prey. Although they are physically different, diurnal birds of prey are much more common. 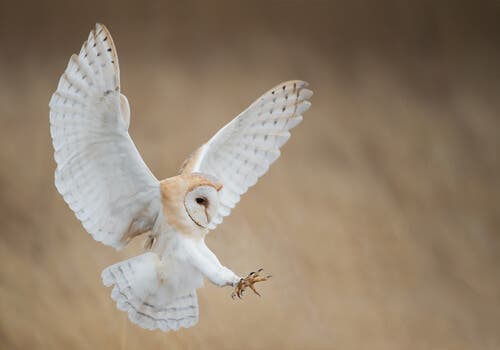 Diurnal and nocturnal birds of prey seem remarkably similar to the naked eye. However, if you compare and owl and a hawk, there are considerable anatomical and behavior differences. However, all birds of prey have great hunting instincts and sharp senses.

Next, we’ll learn more about birds of the prey and some key differences between diurnal and nocturnal ones.

Beyond just appearance, there are essential features that explain why birds of prey resemble each other. Among other things, there’s the fact that they’re all carnivorous.

Birds of prey all have excellent vision. This is important for hunting. In addition, they have strong claws on their legs, which help them to grab and hold their prey. They also have very powerful, hook-shaped beaks.

Their appearance is the result of an adaptive, genetic process called convergent evolution. This means that that different species can develop the same physical characteristics or certain habits that guarantee their survival.

Two animals that are totally different in principle can resemble each other throughout their evolutionary process.

However, if you look at the image of an ancient eagle, for example, you can see many differences to the modern eagle. You can also see how some different species of birds, such as owls and kites, are actually more alike today than they were 100 or 200 years ago.

Differences between types of birds

The morphological differences between diurnal and nocturnal birds of prey are evident. In fact, you can spot them with just simple observation.

Nocturnal birds of prey, such as owls, have stocky bodies and abundant plumage. They also have round heads, large, conspicuous eyes, and almost no necks.

Owls have very particular traits and it’s difficult to confuse them with other types of birds.

On the other hand, diurnal birds of prey have a thinner, “stretched” body. They also have less developed plumage than nocturnal birds.

These birds have a small head, small eyes, and long necks. Their long legs are also more visible and have long claws.

If it’s simple to catalog species of nocturnal birds,then it’s more difficult to identify all species of diurnal birds of prey. Below, we’re going to briefly summarize the main representatives of both types.

The main species of nocturnal birds of prey are owls. Barn owls are a classic example of this species. However, there are many different types of owls.

Here are some of the famous varieties:

As we’ve said, there are many more different species of diurnal birds of prey.

Below, we’ll look at the most common of these imposing birds:

In addition, in the Canary Islands in Spain, you can also find the Canarian Egyptian vulture and the Barbary falcon. These are two very unique types of diurnal birds of prey.

The Amazing World of Birds of Prey
Birds of prey are essential for the survival of the world because they're a natural pestiside. They come in all shapes and sizes, some are even nocturnal. Read more »
Link copied!
Interesting Articles
Birds
5 Species of Geese