Their wingspan can stretch as long as 5.5 feet and they can weigh more than 8 pounds, making it the largest nocturnal bird of prey in the world. 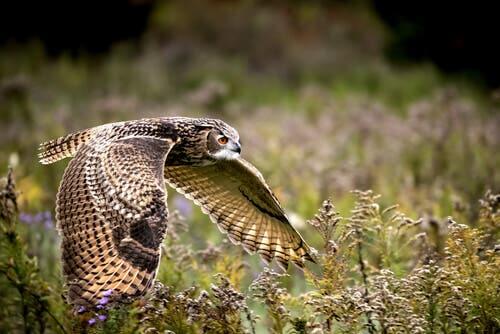 The Eurasian eagle-owl (Bubo bubo) is one of the most common birds of prey, thanks to its majesty and abundance, which has made it very popular in falconry. Its scientific name comes from the Middle Ages and represents the sound that this bird of prey makes.

This species of owl has a brown and mottled plumage, with different shades of brown, black, and white. However, the composition depends on the subspecies. It has two strands of feathers on the sides of the head, in addition to the typical ‘ears’ of these charismatic animals, which are more ruffled in males. Their eyes are the most striking feature of this animal, as they are bright orange.

Its size and weight vary greatly among the different regions where the Eurasian eagle-owl lives, but its wingspan can stretch as far as 5.5 feet and can weigh more than eight pounds. This makes it the largest nocturnal bird of prey on the planet.

Like other nocturnal birds of prey, its flight is especially quiet thanks to combinations of rigid and flexible feather bands. In addition, it has a very velvety feel, allowing it to be a very precise hunter.

The Eurasian eagle-owl has particularly powerful claws and, like other owls, a much shorter beak than that of its fellow daytime counterparts. This doesn’t stop it from being strong enough to tear at its prey.

Its size and weight vary greatly between the different regions where the Eurasian eagle-owl lives, but its wingspan can stretch as far as 5.5 feet and it can weigh more than eight pounds. This makes it the largest nocturnal bird of prey on the planet.

They are solitary animals, that only come together to mate. They lay two to six eggs during the winter and nest on logs or cliffs. As for its hunting habits, they’re at the top of the food chain, and have no predators, except humans.

The Eurasian eagle-owl not only hunts rodents or rabbits, but they can also capture fawns and lambs of up to 22 pounds. They also corroborate with other predators, such as foxes and other birds of prey, such as the common buzzard.

Normally, they hunt at night, protected by their sharp senses and silent flight, allowing it to fly over open spaces and fall on its prey without its shadow being spotted from below.

They are solitary animals, and only come together to mate. They lay two to six eggs during the winter and nest on logs or cliffs.

This species lives in very diverse habitats. They live in places as diverse as the desert regions of Africa and Asia, or the tundra of northern Europe. There are up to 20 subspecies of different sizes and plumages, although they are all very similar.

Some have recently been separated into other species thanks to DNA analysis, such as the Bengali owl or the Sahara owl.

Also, they’re very adaptable and undemanding creatures. They usually live in the mountains in Spain, with many crags, gorges, and rivers, or in rocky ravines. They’re not often seen in dense forests, but this depends on rabbit populations.

The fact is that there used to be a lot of them, but in the last 60 years, they’ve suffered a great setback due to indiscriminate hunting and poisoning, especially in Europe.

Despite this, they continue to be healthy and their population has been recovering in recent years. It turns out that the protective measures for all birds of prey have improved, especially in the restriction of the use of lead, DDT, and other toxic substances.