This bird of prey is a predator of mice and moles. It is very present throughout the Iberian Peninsula. 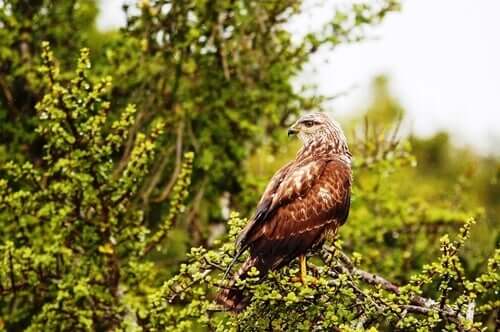 The common buzzard (also called buteo buteo) is the most common bird of prey in Europe. The buzzard has achieved great ecological success as it inhabits all of mainland Europe and parts of Asia. In this article, we’ll talk about its characteristics and important facts.

Characteristics of the common buzzard

This is a medium-sized bird of prey that measures between 16 and 23 inches in length with a 3 ft 7 in–4 ft 7 in wingspan. It also has a short fan-shaped tail. In addition, its plumage varies in color: it covers many shades of brown and white, especially inside the wings.

There are more than eight subspecies of Buzzard due to their huge range. Nevertheless, there aren’t any large differences between them. Bird experts in old times would consider the buzzard to have more sub-species. However, ornithologists in recent times have separated the furthest living species from the group, such as the Himalayan Buzzard.

In Scotland, because of their size, behavior, and markings, the common buzzard is often mistaken for juvenile golden eagles, especially when they’re soaring.

Buzzards are territorial birds, especially during the breeding season. They will fight with other buzzards in aerial battles, ferociously protecting their nests.

The courtship process takes place by the end of winter when the bird couples do synchronized flights in circles before settling on the nests to copulate. Ornithologists call this spectacular display ‘the roller coaster’. The male will rise high up in the sky, to turn and plummet downward, in a spiral, twisting and turning as he comes down.

The call is a plaintive peea-ay, similar to a cat’s meow. Moreover, migrating buzzards tend to vocalize only during the breeding season.

Buzzards are solitary animals but sometimes come together to feed on carrion. They may also group together in winter when there’s less prey, forming a kind of hierarchy that’s determined by the battles already mentioned. Occasionally, people also see them flying in flocks when migrating to North Africa, as some populations are migratory birds.

Although it’s a predator, it’s a curious fact that another bird of prey, the Eurasian Eagle-Owl, hunts them down. These nocturnal animals also inhabit much of Europe, including Spain, and are larger and more powerful than the common buzzard.

They are fiercely territorial, and, though rare, fights do break out if one strays onto another pair’s territory. However, dominant displays of aggression will normally see off the intruder.

Buzzards live throughout Europe except in the most inhospitable areas of Russia and the Scandinavian countries. You can also find it in the Caucasus area, Turkey and Iran. This bird’s territory stretches to the border with Mongolia, and some of its populations migrate to the Middle East, India, and Africa. The ones that do, live on the Eurasian steppe for much of the year.

As for its habitat, they generally inhabit woodlands and open grounds. Most typically, the species lives in forest edges, small woods, or shelterbelts. where they build their nests. Mostly resident buzzards (those who don’t migrate) live in lowlands and foothills, but they can live in timbered ridges and uplands as well as rocky coasts.

A great opportunist, it adapts well to a varied diet of pheasant, rabbit, other small mammals, snakes, and lizards and can often be seen walking over recently worked fields looking for worms and insects.

The buzzard hunts from places that allow him to glimpse a good portion of land to locate their prey. It’s common for them to actually steal prey from falcons.

Although abundant in population, this species has practically disappeared in some countries such as Ireland and Great Britain. This is due to indiscriminate hunting.

In Spain, the Canary subspecies are currently endangered, although its population is numerous in the rest of the country. However, the absence of rabbits, the use of pesticides or toxic medicines and also electrocutions have seriously affected this bird’s well-being. Its use in falconry is prohibited in the Canary Islands and is very regulated in Spain.

Did you enjoy learning about this majestic animal? You can learn about other amazing birds from our recommended articles below. Until next time!