Imperial eagles are philopatric, which means that young couples tend to settle on the periphery of their parents' territories. 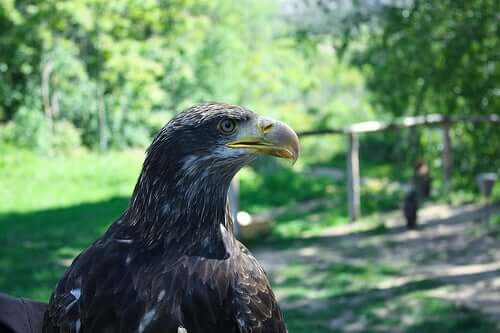 Within the Imperial eagle family, we can find two species. These are the Eastern Imperial Eagle and the Iberian Imperial Eagle (a.k.a Spanish Imperial Eagle). Both are historically related to empires and emperors. These are truly majestic birds that amaze us with their wonderful flight displays. Would you like to learn more about them? Let’s go…

Characteristics of the Eastern Imperial Eagle

This species is one of the many birds of prey that inhabit the northern hemisphere. It specifically lives in the prairie areas of Europe and Asia. However, it also migrates to Africa during the winter.

The adults can have a total length range from 27 to 35 inches with a typical wingspan of 5 ft 9 inches to 7 ft 1 inch. As in most predatory birds, females are larger than males – up to twice the weight – that being that only major difference between the two genders.

Its plumage is beautiful: a dark brown with white spots on the body and a black tail tip. In addition, it also has a golden hue around the neck area. Something interesting to mention is that they have feathers on their legs, which end in very strong and sharp claws that allow them to hunt while flying.

With regard to food, this eagle’s diet is composed of squirrels, rodents, mustelids, foxes, and small birds. This bird of prey corners them in the distance thanks to its powerful sight and flight speed.

Monogamy is a main feature in the genus: each year they return to the same nest to reproduce, which is reconditioned if necessary. For the building of each shelter, they use thick tree branches and then cover the holes with grass and even their own feathers.

Pairs on the breeding grounds engage in aerial displays with loud calling and extensive high circling. This is likely for the purposes of a territorial proclamation to other eagles of their species.

The female can lay up to four eggs, although there’ll usually be two on average. She’ll remain around 43 days with only the surviving and strongest chicks. The little ones will fly at two months of age, and in winter, they’ll migrate on their own looking for a partner for the following summer.

Unfortunately, the Eastern Imperial Eagle has disappeared in many areas of the continent and has become endangered in others. The two stable populations that are preserved today inhabit the Tyrol and Trentino Alps. The main reason for its population’s reduction has been the use of land for massive agriculture.

Characteristics of the Iberian Imperial eagle

Until recently, ornithologists believed the Iberian eagle to be a subspecies of the Eastern Imperial eagle, but they’ve ‘separated’ them because they don’t share most of the DNA. Its scientific name – Aquila Adalberti – commemorates Prince Adalbert of Bavaria and, as its popular name indicates, it inhabits the Iberian Peninsula. Moreover, they mostly populate the marshes of the coast, the mountains, and the dune systems.

The plumage in adults is dark brown except for the upper wings, neck, and shoulders, which are lighter-colored. Its tail, on the other hand, is darker and doesn’t have light stripes like its eastern “cousin”.

Young eagles have a reddish coloration until they reach sexual maturity, around the age of five. We should mention that the female of this species is larger than the male. In addition, in both the male and the female their wingspan can reach between 5 ft 10 inches to 7 ft 3 inches long.

A prominent feature of the Iberian Imperial eagle is that it doesn’t migrate and is monogamous – each couple has a hunting area of around 5,000 acres. Mating season takes place between March and July and the eagle couple makes their nest before laying up to five eggs. The incubation period will normally last around 43 days.

Although young eagles leave the family nest when they’re 3 months old, they continue to live nearby and are fed by their parents for about four more months. After that time, they’ll live a nomadic life until they find a partner and a territory of their own.

It feeds mainly on European rabbits, which comprises about 58% of this species’ diet. However, because the rabbit is its main prey (which is increasingly scarce), the intrinsic mortality of the poisons used by man for agriculture and the direct hunting of the population, the Iberian imperial eagle is a threatened species.

However, almost certainly, the leading cause of this species’ decline was the practice of felling old trees on field boundaries that were the nest sites for the eagle. Among other reasons for its decline are the depletion (both incidental and intentional) of prey species and the incidental consumption by the eagles of poison baits.

Eagles are majestic creatures that soar the skies and always leave us amazed. We hope you enjoyed learning more about this species of eagle today! Until next time.