Logically, the diet you provide for these animals will be key to guarantee quality meat. Continue reading to find out more about raising domestic turkeys. 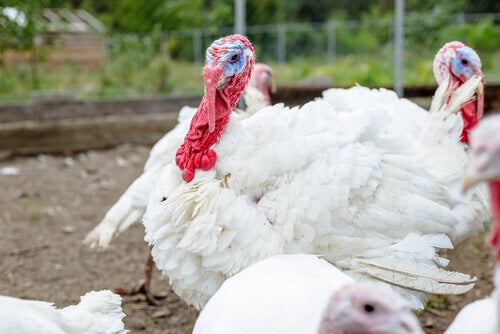 Many people raise turkeys for personal consumption or to sell them for food. In some countries, in particular, turkey is a typical Christmas and Thanksgiving meal. Therefore, raising domestic turkeys provides a lot of profits during this time.

Nevertheless, the nutritional properties that turkey meat has in comparison to other animals have caused it to become a more common element in our daily diet.

Besides having a more complete meat than that of other animals, turkey breast is low in sodium. What’s more, it has fewer calories and fat and contains more protein, calcium, and vitamins than chicken breast. Also, compared to other red meats, turkey is one of the lowest in cholesterol.

The quality of the product that we extract from turkeys will vary according to the food that they’ve consumed during its breeding. The right diet while raising domestic turkeys is what will guarantee healthy nutrition for human consumption and, at the same time, a successful business.

Although they’re birds, turkeys are not able to fly because their wings are twice as big. They can measure up to one 1 foot, 4 inches and their weight can vary from 9 to 44 pounds.

During the first months of life, turkey chicks spend their days under their mother’s wings. In a natural environment, turkey offspring can eat on their own from birth.

How to achieve the breeding of numerous turkeys

When it comes to hatcheries with a large number of turkeys, they generally use other forms of breeding different from those we’ll mention.

Some of the best known breeding techniques in large hatcheries include keeping the turkey in an incubator. Breeders cover the bottom with paper and place food there from the time chicks are born.

Inside this room, there should be 120 or 250 watt lamps located above the animals. This guarantees that the temperature of the environment is around 93ºF during the animal’s first weeks of life.

What do turkeys eat?

After this time, turkeys can begin eating turkey feed. Both the feed and water containers should contain enough food to guarantee their placement every 25 birds. It’s important to keep food and water away from the heat of the lamps, but also to ensure that the food is within the turkeys’ reach.

During the first few weeks of raising domestic turkeys, their diet should contain 30% protein in each ration, adding corn and oats at about 14 weeks. At 80 days, turkeys can begin incorporating potatoes and cereals into their diet. And, at the same time, they should be free to consume grass.

Raising these birds with commercial food isn’t recommended, since this reduces the quality of its meat. It’s also important to prevent excessive growth, as abnormal size alludes to improper feeding (with artificial food). Consumers know that the more natural the turkey’s food is, the better its meat will be.

Females are able to reproduce from the age of three and can do so only in spring. During this time, they’ll lay between eight and fifteen eggs, which they’ll incubate for 28 days.

It’s also important to apply preventive measures that aim to reduce the level of cannibalism. On the one hand, turkeys should be given enough space so that they can move away from others, go out to graze, as well as stay away from light and heat.

Once a turkey has grown enough, but is still young, it’s a good idea to cut off the tip of its beak. This prevents the possibility of pecking, which could result in the death of one of the males in the group.

Learn About the Pheasant’s Domestic Breeding
The pheasant has been gaining popularity for being part of an important gastronomical dish. This is why today the pheasant's domestic breeding is common. Read more »
Link copied!
Interesting Articles
Birds
Discover 5 Different Types of Owls