The Diet of the Domestic Turkey

While this native American bird doesn't make for a good pet, it's very popular for raising on farms because it grows quickly and can be sold for meat. With that in mind, we want to tell you about the diet of the domestic turkey. 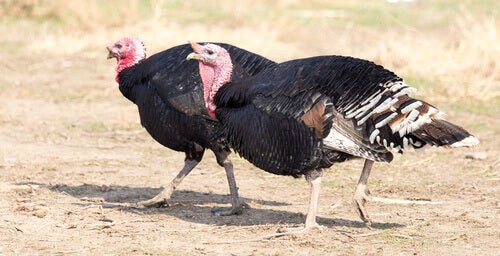 Turkeys are animals that we’ve all grown up with in one way or another. More than likely, you saw one at a farm or a zoo when you were young. And of course, who hasn’t enjoyed one with Thanksgiving dinner? It’s common for farmers to raise them on their land and, with that in mind, we want to tell you about the diet of the domestic turkey.

Before going into more details about what domestic turkeys eat, we want to take a moment to tell you a bit more about these animals.

This type of turkey is commonly raised on farms and barnyards. Though their eggs have little value, their meat is quite popular. Depending on where these animals grow up, they’re given a different name. However, most often we refer to them as turkeys or common turkeys.

The origin of the domestic turkey

Believe it or not, the turkey is a product of artificial selection carried out by man. The purpose of this process was to obtain the required proteins from its meat and eggs.

Some indigenous civilizations treated this animal as a god, associating it with a deity known as Tezcatlipoca. When the Spanish “discovered” America, they brought several of these birds back in order to domesticate and raise them. They called them Indian Turkeys.

Since then, people began to breeding turkeys. They realized how fast they grew and what good meat they produced. However, their eggs weren’t very tasty! As a result, there’s little to know about the commercialization of turkey eggs.

The characteristics of the domestic turkey

This animal prefers living in mild climates. And, thanks to the industrialization of turkey breeding, it’s possible to produce millions of specimens each month. Therefore, acquiring this meat is simple and economical.

Domestic turkeys that are bred have white feathers, while those that live in the wild have dark brown tones. To this date, experts are unaware of the reason behind this distinction. It’s also interesting to note that turkeys don’t have feathers on their heads or necks, which gives them an amusing appearance.

As for their feet, they’re very robust, unlike those of hens, for example. Furthermore, their skin is pink. However, it can also have reddish, purplish, or even blueish spots or shadings.

Now, if there’s one thing that’s striking when it comes to the physical appearance of turkeys, it’s their wattle. This intensely red fleshy protuberance makes the domestic turkey special and sets it apart from other birds.

Some turkeys can measure over three feet tall. What’s more, their wingspan can measure up to 6 feet wide. As for their weight, it tends to range between about 18 and 22 pounds in males. Females, on the other hand, rarely weigh more than 11 pounds.

The diet of the domestic turkey

Turkeys that grow in the wild–in their natural habitat–can feed on insects, grains, and seeds. They can also eat the fruit and vegetables they find in the area.

However, the diet of domestic turkeys that grow up on farms consists basically of feed. In other words, a granulated diet with a high percentage of proteins, an essential nutrient for their development. This is especially true during the first months of life.

As domestic turkeys grow, the proteins in their diets go down while the number of calories they eat goes up. That’s because domestic turkeys are very active animals and need a lot of energy in order to carry out all their daily exercise.

Later on, this calorie intake will continue to increase because, once a turkey is developed, the objective of their diet changes. In other words, the idea is to fatten them up in order to take maximum advantage of each individual animal. So, we can say that the focus of an adult turkey’s diet isn’t based on the animal’s well-being, but rather the benefit of the breeder. Sad, but true.