Cooperation and Eusociality: The Strength of Unity

Teamwork increases the chances of survival in nature. There are various types of cooperation, from mutualism to eusociality and the formation of superorganisms. 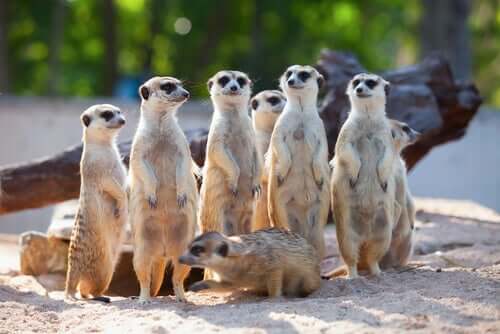 Cooperation and eusociality are a matter of life and death. When animals work together, they’re more likely to survive and procreate. For example, clownfish and anemone protect each other against predators and parasites.

Other behaviors aren’t as well known, but are just as important. Many mammals look after each other’s young. Animals of the same species will look after offspring even if they’re not their own. A gang of meerkats, for example, is lead by an alpha female, who is the only one to reproduce, and her helpers. Studies have shown that the number of helpers per dominant female is related to the number of offspring that survive.

We have seen known examples of cooperation, but what happens when sociality defines the very existence of the animal? We’ll explain below.

Eusociality refers to the highest level of social organization given to certain animals. Their characteristics are:

When breeds begin to govern themselves by a dominant individual, we speak of eusociality. Eusociality is mainly seen in insects; hymenopterans are masters of teamwork.

The difference between a female being a queen or a worker depends on the type of food it receives as a larva. She is the center of the hive, can live from 2 to 4 years and lays up to 1500 eggs per day! The task of the rest of the bees is to protect her and keep her nourished at all costs.

There are differences in the size of colonies and breeds, depending on the species. For example, the bumblebee is known to live in colonies of one queen and up to 500 workers, while wasps may have thousands of queens and millions of workers in a colony.

Perhaps these hierarchies are the pinnacle of cooperation, but there are plenty more examples.

The term “superorganisms” refers to colonies that act as a single living being that has their own physiology. The queen is the brain, and the structures built and worked on are the body. As a unit they have a regulated common temperature, a continuous supply of food, and communication similar to a nervous system. Termites are a good example of this because they create huge structures compared to their size.

Each member of a superorganism could be compared to each cell and bacteria in our bodies. Both are parts of something much larger.

However, insects aren’t the only creatures capable of eusociality, there are also examples of this in mammals. The naked mole-rat is the perfect example.

This curious animal lives in a colony of about 80 individuals. Each colony consists of a complex system of caves connected by tunnels of different depths. In these colonies there’s only one female that reproduces, and who copulates with the same 2 or 3 males up to 5 times a year. Those that can’t reproduce search for food and defend the colony.

All for one, and one for all

As we’ve seen throughout this article, the union of many small beings can be a force to be reckoned with. From complex hierarchies, to structures that act as a single living being, cooperation and eusociality have a single purpose: prolonging the life of the species. But you don’t need to look at animal behavior to see this, as we ourselves aren’t so different from animal colonies.

Competition Between Herbivores In The Wild
Competition between species is a natural phenomenon that's often observed in wild animals. Today, we'll be taking a look at competition between herbivores. Read more »
Link copied!
Interesting Articles
Mammals
What Elephants Eat in Captivity