The Amazing and Complex Social Structure of Bees

Bees are highly sophisticated bees that play a key role in life on earth. Find out about the amazing and complex social structure of bees in today's article. 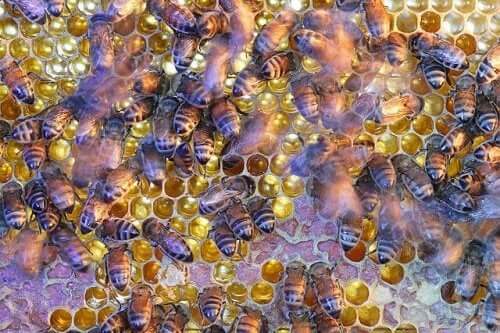 Social bees evolved from wasps and are incredibly organized creatures. Each individual has a specific task which it completes without fail, contributing to the life of its colony and the survival of our planet. What’s more, the social structure of bees is very well determined. And that’s exactly what we want to talk about in the following article.

Without a doubt, the level of community within this species has a very high level of development. Each colony is composed of three groups: a queen, drones, and workers. In order for a beehive to be considered “normal”, there must be at least 15,000 members. And the most vigorous of hives can contain up to 50,000 individual bees.

One of the main characteristics of bees is that they are eusocial beings. This means that they live in a society that consists of different castes. Although there are also some solitary species that don’t produce honey and only collect for their own consumption.

Going back to the social structure of bees, these insects build their nests with “cells” that all have the same size. Here, they store their pollen and royal jelly and also use them to protect their larvae.

The social structure of bees and castes

Within a colony of these insects, there are three castes that are under the dominion of a matriarchal system. So, the head of the family is a female, and she is the mother of every other bee that inhabits the hive.

The queen bee is the soul of her community since, without her, the hive cannot continue to exist. There is only one queen per colony, and she is responsible for laying all the eggs. What’s more, it’s the queen that determines which eggs will be females (workers) and which will be males (drones).

If a queen bee dies, one of the other females in the hive will develop reproductive organs. From then on, she will be able to lay eggs thanks to the copulation of the males in the colony. However, all of the new bees that are born will automatically be drones. Therefore, the “family” will slowly decline as the workers (females) die off.

The queen isn’t raised in a typical cell in the honeycomb, but rather, the workers build her a special and larger dwelling place. She feeds off royal jelly and has a life expectancy of three years. By releasing pheromones, she regulates all of the activities that take place in the colony.

The only option that male bees have in social bee colonies is to serve as drones… And the only job that drones have is fertilizing the queen so that the colony can continue to exist. The queen decides how many males will be in her colony–a number that varies between 200 and 800 individuals.

The laying of the eggs that the drones fertilize occurs in the spring and summer. This event is known as the mating flight and can last for up to 5 days. So then, during the colder months, no new drones are born. Rather, they come to life after 24 days and come from unfertilized eggs. For this reason, drones possess half the chromosomes that female worker bees possess.

The physical characteristics of drones include large eyes–larger than those of worker bees. They also have a long and robust abdomen. Since worker bees are responsible for feeding the drones, drones don’t need to find their own nectar. Therefore, their tongues are shorter than those of the workers. As for their reproductive abilities, drones are fertile for 38 days.

Workers (all female) are the most numerous caste within the social structure of bees. Their reproductive organs are atrophied, meaning they are not fertile. They take 21 days to be born once the queen lays fertilized eggs. They live no longer than some 65 days during the warmest months, and 120 days during colder months.

Morphologically, worker bees are smaller in size to the queen and drones. They have a very developed tongue in order to collect nectar and store it in a special pouch. They also have excellent eyesight that allows them to locate flowers from a distance. What’s more, on their back legs they have “hairs” that gather grains of pollen.

As for their task, working bees have a number of diverse functions. It all depends on their age–whether they are young (under 21 days) or adults, which is when they can leave the hive. The functions are:

What If a Bee Stings My Dog?
Bee stings can be very painful for a dog, so it's important to be prepared. In this article, we'll tell you how to react if it happens. Read more »
Link copied!
Interesting Articles
Invertebrates
Discover the Golden Tortoise Beetle