Originating from Africa, these mammal family consists of a multitude of subspecies because they can mate among one another. Therefore, the divergences may not be very clear on many occasions. However, they vary in color and the pattern of their spots. Today, we'll talk about nine different giraffe species. 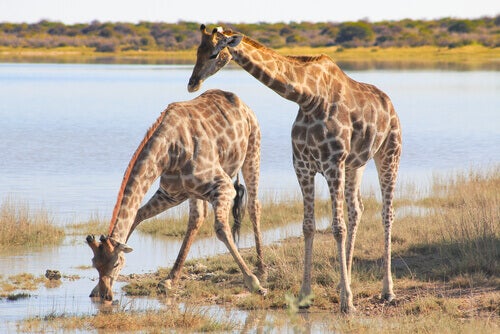 It’s the tallest animal of all, and it can reach heights of 20 feet. The giraffe stands out for its long neck and beautifully patterned fur, and only lives in the wild in different regions of Africa. Many are unaware that there are actually a number of different species in this mammal family, each with its own distinctive spot pattern. Today, we’ll help you discover nine different giraffe species!

How many different giraffe species exist?

Fascinating and beautiful at the same time, you can admire giraffes during those typical Africa safaris through a wide variety of national parks. Basically, you can differentiate between them by the patterns on their fur and the color of their spots.

These different species are able to mate among one another–a phenomenon known as hybridization or cross-breeding. As a result, they produce new subspecies. It can be difficult to distinguish between these subspecies, given that the differences between them can be very slight.

With their long legs and extra large necks, these mammals walk and gallop, depending on the occasion. They can reach the highest branches in search of leaves and tender buds, and then spend several hours ruminating.

The known giraffe species in existence are the following:

The Nubian giraffe lives in Ethiopia and Sudan. It stands out from other giraffes because its spots have an irregular square shape. They’re dark brown with a light background, and don’t appear on the belly, inner thighs, or below the knees.

This particular species is not very common, as its population is very small and spread out over Congo, Sudan, Chad, and the Central African Republic. In comparison to other giraffes, the Kordofan is relatively small and its spots become more irregular on its belly and legs.

The West African giraffe is endemic in the region and its habitat includes three countries: Burkina Faso, Chad, and Níger. In the past, it also lived in Nigeria. It’s now in danger of extinction and stands out for its reddish spots with a yellow background.

This giraffe gets its name from the British zoologist Walter Rothschild and lives in protected areas in Kenya and Uganda. While it’s not at risk of extinction, the decrease in pure specimens due to hybridization is alarming.

This species stands out from the rest thanks to its dark spots and because it can develop five “horns”. These include the two typical horns that all species possess, as well as another set behind its ears. And, finally, it can have one more horn in the middle of its head.

Originating from Somalia, Kenya, and Ethiopia, this giraffe is one of the most well-known. Its appearance is characterized by large, polygonal, liver-colored spots against a bright white background.

It’s also one of the tallest among the different giraffe species. The males of this species perform a ritual known as “necking”, in which they hit their necks against one another in order to determine who gets the females in the herd.

This is the largest among all of the giraffe species. While it used to live throughout the entire African continent, it now resides only in Kenya and Tanzania. The spots on its body are jagged and irregular. Another characteristic that distinguishes the Masai giraffe is its ability to kill predators with a single kick if attacked when their young are near.

The Rhodesian, also known as Thornicroft’s giraffe, lives only in Zambia, specifically in the South Luangwa National Park. The spots on its body are dark and have a very light background. In males, the spots are darker than in females.

This species lives in the southern region of the African continent, in Mozambique, Zimbabwe, Botswana, Namibia, and South Africa. Their round and star-shaped spots set them apart from other giraffes. They even have these spots on their legs and hooves.

The Angolan or Namibian giraffe extends throughout Angola, Zambia, Botswana, and Namibia. One of the particularities of the species in comparison with other species is that its spots are irregular and jagged. What’s more, their color fades toward the edges and they have the shape of a tree leaf on the back of their bodies. You can see these giraffes in Etosha National Park in Namibia.

Interesting Facts About the Behavior of Wild Elephants
Every animal species displays differed characteristics when they're in a favorable environment.Today we'll look at the behavior of wild elephants. Read more »
Link copied!
Interesting Articles
Mammals
All About the Southern Right Whale Dolphin