Examples of Animals that Use Camouflage

Animals that use camouflage can blend in with any environment and it's sort of incredible. So much so that they become practically invisible, not only for their predators or prey but for the human eye as well. 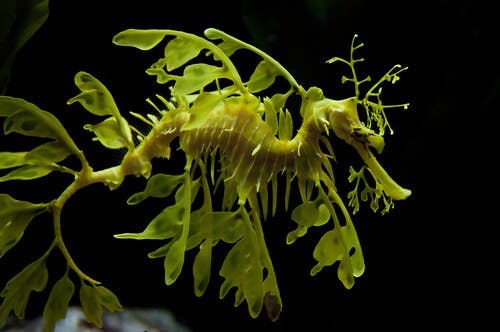 Many creatures try to hide in their environment to either avoid or confuse their predators. In the animal kingdom, there are several different techniques used for blending into one’s environment. In addition, there’s a significant group of animals that use camouflage in order to hunt undetected.

Animals that use camouflage

Animals have created a few strategies to blend in with their environment. When we think about those who camouflage, we often think of the chameleon. And although the way they change color is spectacular and only a few animals can do it, it’s not the only method animals use.

Most of the animals that camouflage do so thanks to their colors. They change them to closely resemble their surroundings, and thus be less visible. No matter the size of the animal, from insects to giraffes, many use their colors to blend in.

In addition, others play with immobility. Many predators can only see their prey when the latter moves. So, they stay still for quite a while. The stick insect and the flatfish are hard to see due to this feature.

Another example of spectacular camouflage is that of animals that physically resemble their surroundings. For instance, there are lizards that are similar to tree barks; sea dragons that look like algae; and even butterflies one would mistake for flowers.

Animals use various strategies to increase their chances of survival. These are just a few examples:

What we know as a stick bug is actually an entire family of insects made up of almost 3,000 species. They’re known for their body shape, which resembles the vegetation among which they live: leaves, sticks, and branches.

However, their camouflage isn’t based on the shape of their body. No, they have many more strategies. For example, they perfectly match the color of the leaves they live on and can either stay still for a long time or move so slowly no one can detect their movements.

They live in many different areas of the planet, so they’ve been able to develop all sorts of body shapes. They do so according to the shape of the leaves or the color of the wood they live on. The largest insects we know about, the same that measure over one foot in length in some species belong to this family.

The chameleon is the king of animals that camouflage themselves. They belong to a reptile family made up of more than 150 different species, most of which live in central and southern Africa.

Their best-known ability is to change and blend with their surroundings, although scientists point out that this color change is due to other circumstances, such as temperature and time of day.

They’re characterized by their eyes, which can move independently from each other, and by a long fast tongue, which they launch at their prey to hunt them.

The chameleon can change color thanks to specialized color cells distributed in different layers of the skin. These cells can regulate what color pigments they contain and thus reflect or show various shades and highlights.

This bird lives in the northern part of South America. It’s nocturnal and feeds on insects such as moths and bats. They spend the day on the bare branches of the trees and become active at night.

The camouflage of the great potoo is based on three strategies: the color of its plumage has a pattern similar to that of the trunks it is held during the day and the same pattern makes it difficult to identify the actual volume of the animal. That is, it creates an optical illusion.

Finally, the bird’s third strategy is immobility: along with the other two, it makes it nearly impossible to locate them during the day. Their large eyes give them away at night, although they’re already active and can defend themselves against their predators.

Leafy seadragons are among the animals that use camouflage

The leafy seadragon – in the main photo of this article – is a distant relative of seahorses. The defining characteristic is the shape of their body: it resembles algae in shape and color. Almost all of their fins are for camouflage, as they’re powered by a pectoral fin and two dorsal tails.

This animal lives off the coast of Australia and, although it’s not a direct relative of seahorses, they do have a lot in common. Their diets are similar, males also carry eggs and their bodies are similar — if you ignore their leafy fins.

Camouflage is a fundamental survival strategy for many animals. Prey needs to hide and predators must hunt without being seen.

In short, nature has given animals that camouflage themselves different ways of achieving it, each one more surprising. Nature is so wise!

The Master Techniques of Animals that Camouflage Themselves
In this article, we'll tell you more about some animals that camouflage themselves and the master techniques they use. They're truly amazing! Read more »
Link copied!
Interesting Articles
Amphibians
The Common Midwife Toad