Water pollution is caused by humans discarding plastics, chemicals, and other waste into seas and rivers. 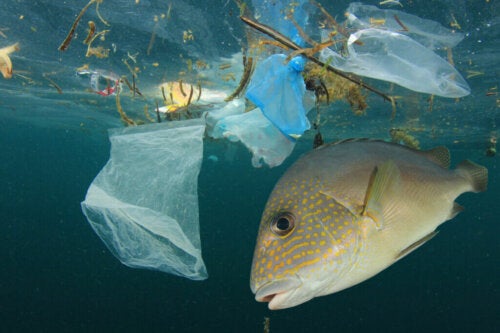 The planet’s aquatic ecosystems are seriously threatened by water pollution caused by human activity, and, unfortunately, this seriously affects fish and other marines species.

Heavy metals, microplastics, and changes to the physical and chemical make-up of the water, along with the eutrophication of lakes and rivers, all have a direct impact on the abundance, diversity, and life cycle of both freshwater and saltwater species. In this article, we’ll tell you about the main problems caused by water pollution and how it affects fish.

Humans are the only producers of microplastics on the planet, so, sadly, this is entirely down to us. Despite efforts to reduce their use and consumption, they have been ever-present in the ocean since the 1960s.

Microplastics are tiny fragments of inorganic material that pollute the environment. The National Oceanic and Atmospheric Administration (NOAA) defines microplastics as any plastics below 5mm in size.

These fragments can come from many different sources. These include tires, cleaning products, cosmetics, clothes, everyday plastics (bottles, bags, cartons, straws), and industrial processes. It’s estimated that between 2 and 5% of all plastics manufactured end up in the oceans.

Microplastics are divided into the following different categories:

Plastics don’t degrade but simply fragment into smaller particles, which are then eaten by many different freshwater and saltwater creatures, such as fish, crustaceans, and mollusks. They can even end up in the bodily tissues of these animals and many of them will end up on your dinner plate.

In fact, the levels of these plastics present in fish will not just come from the water but from the other species that they eat!

Rivers and seas contain a lot of wastewater produced by industrial and mining activity and this has a big impact on the water and its inhabitants.

In fact, the level of pollution is so high that researchers have observed changes in the behavior of fish in the River Thames due to contamination by substances such as caffeine or even cocaine.

People who consume these drugs then pass the chemicals on through their urine and this ends up contaminating the river. These chemicals have the same effect of euphoria and hyperactivity that humans experience. Experiments carried out in controlled conditions have yielded the same results in animals.

These substances accumulate in the brain, muscle, gills, and skin and change the fish’s behavior to such an extent that it can affect their chances of survival. This is especially clear when they choose not to flee in the face of predators.

Eutrophication is when there’s an excess of nutrients in the water owing to a build-up of organic waste. These nutrients mainly consist of nitrogen and phosphorous and cause algae to grow out of control. In turn, the algae consume more oxygen in the water. This tends to happen in ecosystems where the water doesn’t change much, such as in reservoirs or lakes.

This situation is due to a variety of things, including fertilizers, excrement from livestock, industrial waste, nitrogen oxide, sulfur in the rain, and waste from forestry activity.

This explosion of algae in the first phase of eutrophication causes the water to turn cloudy, preventing natural light from reaching the bottom.

As a result, plants can’t carry out photosynthesis or renew oxygen levels, and they end up dying. With less oxygen, fish and other species all end up dying. In fact, many instances of fish dying en masse have happened as a result of eutrophication.

The result of this chain reaction is cloudy water, with a dense appearance and a lot of biomass. This could seem positive at first, but it reduces the quality of the water and the biodiversity of the ecosystem.

A problem caused by humans

As you can see, both too little and too much life can be harmful to an aquatic ecosystem. But the levels of microplastics in the oceans is the most immediate problem that we need to address.

Pollution is destroying life in both the oceans and the rivers but it’s within our hands to change things. The key is to reduce the amount of waste that we produce in the first place.

Are There Plastic-Eating Worms?
The discovery of plastic-eating worms or larvae is shrouded in hope and skepticism. Here's some hopeful data on the topic. Read more »
Link copied!
Interesting Articles
Fish
Find Out All You Need to Know about Blowfish