Is it True that Sharks Don't Get Sick?

As incredible as these aquatic animals are, the claim that sharks don't get sick is false. Just like any other animal, they're vulnerable to parasites and a variety of illnesses, including cancer. 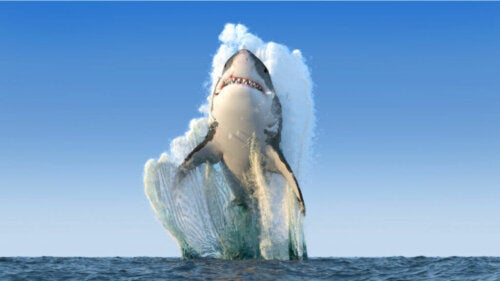 There are many reasons why people are fascinated by sharks. However, not everything people tend to believe about these animals is true. For example, many think that sharks don’t get sick, but that’s just not the case. In order to better understand and appreciate the marine giants, we need to take a closer look at their biology.

First of all, did you know that sharks have been around since long before the time of dinosaurs? In fact, the registry of their evaluation goes back some 450 million years. Therefore, these creatures possess adaptations that have allowed them to survive where many other creatures couldn’t.

One of the most striking characteristics, which they share with their relatives the stingrays, is that they have no bones. Their skeletons consist completely of cartilage. What’s more, they can produce more than 30,000 teeth over the course of their lives. So, when one tooth falls out, another tooth from one of the back rows takes its place.

It’s a myth that sharks don’t get sick

The myth that sharks don’t get sick is something we often run across on social media. It’s common to read that these are the only animals that don’t get sick, or that they’re even immune to common diseases like cancer.

At the beginning of the 1990s, a non-scientific book became famous, claiming that shark cartilage could save cancer patients. While the document didn’t claim that sharks are immune to cancer, it did argue that it’s uncommon for them to have solid tumors.

The supposed miraculous properties of shark cartilage regarding cancer

First of all, in order to understand these arguments, we first need to understand the concept of angiogenesis. This word refers to the process through which new blood cells develop out of the already present vasculature. So, angiogenesis is the formation of new capillaries in different tissues.

At the same time, it’s common for angiogenesis to occur in many types of tumors and has to do with tumoral growth. What’s more, cartilage doesn’t possess blood vessels. In other words, it’s avascular.

Very rarely do we see the development of malignant tumors that involve cartilage. Therefore, the market for alternative products considers cartilage a source of antiangiogenic compounds.

Science refutes the myth that sharks don’t get sick

Contrary to popular belief, it’s an unquestionable fact that sharks suffer from all sorts of illnesses. Without a doubt, scientific reports have registered cases of cancer in sharks, and even chondromas (cartilage cancers).

To date, experts have documented tumors in at least 23 different shark species. And reports of cases may go up as research regarding cancer in these animals increases.

It’s important to note that, though cartilage may possess antiangiogenic properties, there’s no proof of its effectiveness as a treatment. In other words, there are no reports that the ingestion of cartilage orally in powder form actually prevents the appearance of cancerous tumors.

It’s also interesting to look at the research regarding Neovastat, a compound extracted from shark cartilage. Scientists evaluated its combination with chemotherapy in a clinical trial in phase III lung cancer patients. However, after more than 6 years of follow-up, they closed the trial due to a lack of therapeutic effectiveness.

There was no improvement in overall survival in any of these studies. Just the same, the market is still trying to associate shark cartilage with the treatment of illnesses like psoriasis.

The importance of sharks in the marine ecosystem

According to a 2013 study, human beings kill some 100 million sharks per year. The overfishing of sharks has to do with the demands for their meat, liver oil, cartilage, and their valuable fins. Often, fishers will cut the fins off of live sharks and use it for shark fin soup, and ancient and expensive Asian delicacy.

It’s important to point out that the loss of shark populations is a reason for concern. As apex predators, they help balance the ecosystem in our world’s oceans. If there aren’t enough predators, then there’ll be a series of changes in the ecosystem that will even affect marina plants.

Organizations like the Convention on International Trade in Endangered Species of Wild Fauna and Flora (CITES) progressively add to the list of shark species with commercial protection. However, these initiatives may take time to arrive.

La reproduction of sharks is varied and complex

Depending on the particular species, sharks reproduce three different ways:

What’s more, the duration of gestation varies according to each species, as does litter size. In fact, the number of young a mother shark can give birth to ranges from two (viviparity) to 100 (oviparity). The main consequence of very long gestation periods is that vulnerable shark species take a long time to regain their numbers.

Given that sharks have slow reproduction rates and development, it can be hard for populations to recover from great losses.

Society is a machine that can dictate patient behavior patterns, the type of treatment they seek, and what they decide. Therefore, it’s important to ponder the fact that false beliefs among society create insuperable obstacles.

It’s crucial that we remember that most of the information on the internet and printed media is not regulated. Therefore, it can contain extreme viewpoints that make current problems even worse. That being said, the commerce of materials that come from sharks to combat cancer is a clear example of human ignorance.

11 Species on the Brink of Extinction
Mankind's actions have huge consequences for the planet, and many species are now dying out. Let's take a look at 11 species on the brink of extinction. Read more »
Link copied!
Interesting Articles
Fish
Different Types of Water for Your Fish Tank