Today we want to present you with a list of the oldest animal species still in existence today. Do you think you can guess any animals on the list? 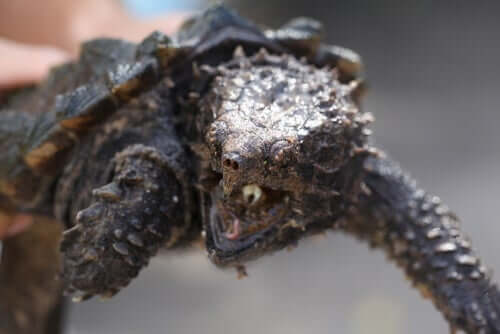 While it’s true that species have evolved with the passing of time, some have remained the same for millions of years. In most cases, the oldest animal species still in existence today inhabit the depths of the earth. Would you like to discover more about them? Stay with us!

What are the oldest animal species still in existence today?

You’d be surprised to know that some species that have existed for millions of years haven’t changed too much from their ancestors. For a variety of reasons, they haven’t encountered the need to evolve or adapt to a new habitat. Nor have they suffered extinction like dinosaurs and so many other animals. The oldest animals species that still dwell on our planet today are:

This shark is striking for a number of reasons. At first sight, it’s easy to understand why this fish carries the name that it does… It possesses a very protrusive, free moving jaw and an extended snout.

What’s more, this enormous fish can measure up to 11 and a half feet and weigh up to 1545 lbs. It has pointy teeth, small dorsal fins, and a white body with pink and blue hues. There’s a lot we don’t know about this ancient species, as it lives at depths of more than 1400 meters. Nevertheless, it’s been swimming around the floors of the Atlantic, Indian, and Pacific oceans for 118 million years!

The silverfish is an insect from the Zygentoma order, of ancient origins. It has a long, flat body that’s either gray or brown. In order to develop, the silverfish needs a lot of humidity. Therefore, it tends to live in caves, under rocks, and among leaves that have fallen from trees, etc. And you may also find them in your home.

At the same time, these nocturnal insects are omnivores, although they prefer plant-based food. Experts believe that they’ve been crawling around our planet for more than 400 million years. And, in all this time, their primitive features haven’t varied, nor has their physical appearance.

Next on our list of the oldest animal species is the Martialis heureka, from the Amazon jungles of Brazil. Its generic name means “from Mars”, and it carries this title due to its “strange” characteristics in comparison to other species in its family. For example, it has no eyes, its body is light-colored, and its predator skills are impressive.

The Martialis heureka hasn’t always been the same. In fact, experts believe that its ancestors could, in fact, see. Just the same, this species has lasted for 120 million years, almost without alterations. For this reason, these insects have stingers like their “mother” wasps and their “sister” bees.

The alligator snapping turtle is another one of the oldest animal species still in existence today. It lives in America, specifically in the southern United States, and is considered one of the largest freshwater turtles. Its large head and long tail, as well as its shell with three dorsal rows, are the main physical attributes of this unique species.

The technique this animal uses to hunt underwater is amazing. It sticks out its tongue–which looks like a worm–to attract the attention of its prey. Then, it stays still until its target becomes quickly and forcefully trapped in the turtle’s closed mouth.

The sturgeon is the second fish on our list of the oldest animal species still in existence today. These fish live in the northern hemisphere of our planet, across all of North America and Eurasia. And they’ve done so for some 250 million years. The eggs of these primitive fish are very valuable to those who appreciate caviar. The female sturgeon lays its eggs along the shores of rivers.

It’s worth pointing out that this fish, which dates back to the Jurassic period, now finds itself in danger of extinction. Its numbers are dwindling due to indiscriminate fishing and a low birth rate.

For the last 250 million years or so, this enormous reptile has inhabited different ecosystems… including swamps, wetlands, and rivers. Related to extinct dinosaurs, the body of the crocodile is long and covered in scales. This species has barely changed at all over the course of its long history here on earth.

Although these reptiles are very fast in the water, on land they drag their bellies and move about on short legs. Because of this, they spend most of their time underwater. Despite how long these animals have inhabited our earth’s rivers, their brains aren’t very developed. Of course, this doesn’t privy them of the possibility of using very ingenious techniques when it comes to hunting.

Extinct Dog Breeds
There are currently more than 800 types of dog worldwide. However, in the past there were others who, for several reasons, are not still with us today. In this article you can learn about some extinct dog breeds. Read more »
Link copied!
Interesting Articles
Mammals
What Elephants Eat in Captivity