The lionfish is the first exotic species to invade the coral reefs of the Atlantic Ocean, multiplying at a rate never seen before in marine history. And now there's a lionfish invasion threatening the marine system of the Mediterranean Sea. 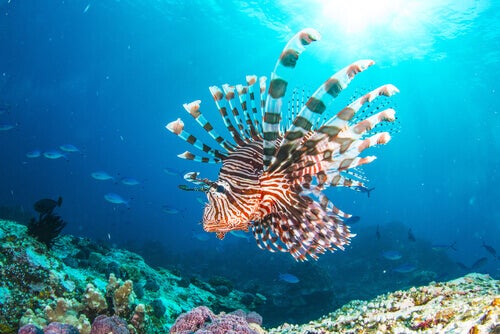 The lionfish (Pterois miles) belongs to the genus of venomous fish Pterois and is native to the Indio-Pacific. You may also know this species by other names, including zebrafish, firefish, turkeyfish, tastyfish, or butterfly-cod. It’s characterized by it’s red, white, and black stripes that serve to warn off predators. At the same time, it has striking pectoral fins and lateral fins that have sharp, venomous spikes. Currently, a lionfish invasion has already occurred in the Atlantic, and now the same fate threatens the Mediterranean.

It’s worth pointing out that the Pterois genus encompasses a total of 12 species, among with P. radiata, Pterois volitans and Pterois miles are the most commonly studied. What’s more, the species belonging to this genus are popular aquarium fish, thanks to their exotic, attractive appearance.

What area is this predator native to?

The lionfish inhabits coastal waters of depths between 6 and 260 feet, approximately. And, in its native area of distribution in the Indian Ocean, this animal is very widespread. In fact, you can find lionfish anywhere along the coast of eastern Africa from Somalia to Port Alfred, South Africa.

You can also spot them from South Africa to the Red Sea and the Persian Gulf. And also to the east all the way to Sumatra, Java, and Bali. As for the red lionfish, it inhabits the western and central Pacific as well as Western Australia.

The lionfish is a successful invader

It’s important to note that in its native region, this species isn’t especially abundant. However, both the lionfish and the red lionfish have has unusual success upon being introduced to the Atlantic Ocean.

In fact, we can go so far as to use the term “lionfish invasion”. The truth is, the introduction of this species has resulted in one of the fastest and most ecologically damaging marine invasions to date. And in order to discover the origin of the invading community, researchers conducted several studies regarding their genetic diversity.

As a result of their research, they concluded that they come from a small founder population in the southeastern United States.

In the western Atlantic, the lionfish has become the dominant predator of the coral reefs. There, it’s had a major impact on native fish. So much so, in fact, that experts estimate that, in just two years, it’s managed to reduce the abundance of over 40 different species.

Why is the lionfish so successful as an invader?

According to experts, the dramatic success of the lionfish as an invader is the result of a combination of diverse factors:

Have lionfish entered the Mediterranean?

To date, there have only been occasional reports of lionfish in the western Mediterranean. In fact, experts believe that unfavorable oceanographic conditions limited the dispersion of their larvae.

In the past 5 years, the threat of a lionfish invasion in the Mediterranean seems to be materializing. Sightings of the lionfish P. miles in the coastal waters of southern Cyprus are becoming more and more frequent.

It’s important to point out that the invasions of exotic species are not the only threat to Mediterranean ecosystems. In fact, there are multiple threats, including overfishing and climate change. Water temperatures in this sea are constantly increasing and invading species are expanding. Both of these factors cause changes in the marine community and tropicalization phenomenons.

Currently, there are more than 1000 exotic species in the Mediterranean. Of these species, most of them are thermophilic species that have entered the eastern basin through the Suez Canal. The recent widening of this canal, along with the warming of the sea’s surface, are circumstances that favor the positioning of the lionfish in this niche.

Final reflection regarding the lionfish invasion

The Mediterranean Sea is an important reservoir of oceanic diversity that houses some 17,000 species. The impact of the lionfish as an invasive species is linked to habitat modification and a decrease in local biodiversity.

Given its high predation rates, the lionfish decreases the abundance and repopulation of native biota. In general, experts have yet to completely evaluate the socioeconomic impact. However, one thing is clear. Human beings have played a key role in favoring the expansion of invasive species.

Seven Animal Species with Harmful Habits
There are some animals that actually harm their environments. In this atricle, we'll tell you all about seven species with harmful habits. Read more »
Link copied!
Interesting Articles
Fish
Are There Scaleless Fish?

In certain parts of the oceans, there are high numbers and a great variety of animals. This is a product…