The Secret of Glow-in-the-Dark Sharks

The secret behind glow-in-the-dark sharks is they have metabolites in their skin that produce fluorescent light. This light makes them invisible to other marine beings but allows them to be detected by others of the same species. Discover the other advantages of being bioluminescent. 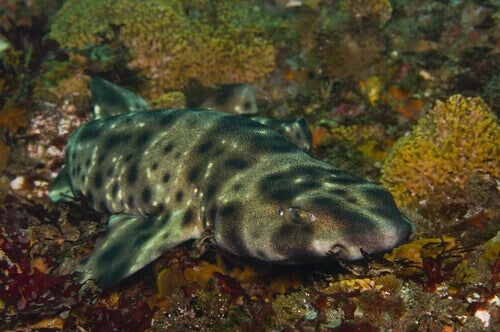 Bioluminescence, the secret of glow-in-the-dark sharks, is a common phenomenon in marine species. It’s a defense strategy mainly. Relatively recent findings indicate there are deep-sea sharks that emit bright green light through their skin. This quality doesn’t seem too useful when someone wants to remain anonymous. However, there are many advantages to it. Continue reading to find out more about these mysterious animals who glow in the dark.

There are many bioluminescent animals. In some of them, this is due to green fluorescent proteins called GFP, as in jellyfish and crustaceans. It may also be indirectly due to symbiosis with luminescent bacteria, as is the case of the squid Euprymna scolopes.

In 2019, a group of researchers discovered some sharks that could communicate with each other through fluorescence. They were the Cephaloscyllium ventriosum (Catshark) and Scyliorhinus retifer (the Chain dogfish) species, which belong to the same family and whose skin has both light and dark tones.

There’s an established metabolic route of Bromo-tryptophan-kynurenine molecules in these beings. This is the reason for their bioluminescence.

In addition to the light and dark tones on the skin of this species, they have fluorescent green spots all over their body.

Unlike the catshark, this species doesn’t have fluorescent dots as a characteristic. Instead, the skin has a pattern of linked black lines with dark and light areas.

Advantages of a glow-in-the-dark shark

According to a study published in the journal Science Daily, researchers used fluorescence microscopy to examine tissue samples from the skin of these sharks. They noticed the fluorescence only in lighter skin and that it shone differently in each species.

Another interesting finding was that these sharks have a special ability to see the bioluminescence. This is because their visual mechanism allows them to detect it. This is an advantage because, although they’re not visible to other fish, they can definitely communicate with one another.

In addition, each species emits the light it produces in a specific way.

Thus, bioluminescence allows individuals of the same species to communicate and also helps them hide from their predators.

Catsharks spend their lives circulating across the seabed (they’re benthic) and moving sinuously through the sediments of the depths. Marine bacteria such as Staphylococcus aureus and Vibrio parahaemolyticus reside in these areas.

This inspired the aforementioned researchers to put the bioluminescence-producing metabolites to the test. This is because they wanted to see how they acted against bacteria.

What they found is these small molecules protect animals from microbial attacks. This makes sense because these glow-in-the-dark sharks are in constant contact with the seabed.

Another property of metabolites

In recent years, studies focused on bioluminescence have been a great step in scientific advancement. We’re still really far from understanding how it works, despite the large number of publications explaining aspects of how and why it occurs.

In addition to the data obtained in the research mentioned above, there’s another interesting discovery. It’s a parallelism between the biosynthetic pathway of the Bromo-kynurenine of metabolites and the tryptophan-kynurenine pathway that occurs in vertebrates.

The latter regulates various biological processes in humans. For example, the accumulation of kynurenine in the brain related to mental disorders such as depression and schizophrenia. Therefore, these metabolites could play an important role in the human central nervous system.

Glow-in-the-dark sharks, a world of light

After these findings, we can say that the bioluminescence generated in these sharks has unique properties.

In this case, their metabolites are destined to emit a bright green color throughout the light areas of the skin. Thanks to this quality, these species are invisible to other marine creatures and can still detect each other.

Likewise, these same molecules offer them resistance to bacterial infections. After everything we’ve mentioned here about these glow-in-the-dark sharks, we can only say that nature never ceases to amaze us.

The Amazing Truth About the Squid’s Genetic Code
Squids are extraordinary animals with some amazing abilities, but today, we'll look at the squid's ability to change its genetic code. It's truly amazing! Read more »
Link copied!
Interesting Articles
Fish
Different Types of Water for Your Fish Tank