The world of insects is full of miniature curiosities, and what stands out most is that some of those 'curiosities' are better at hiding than others. 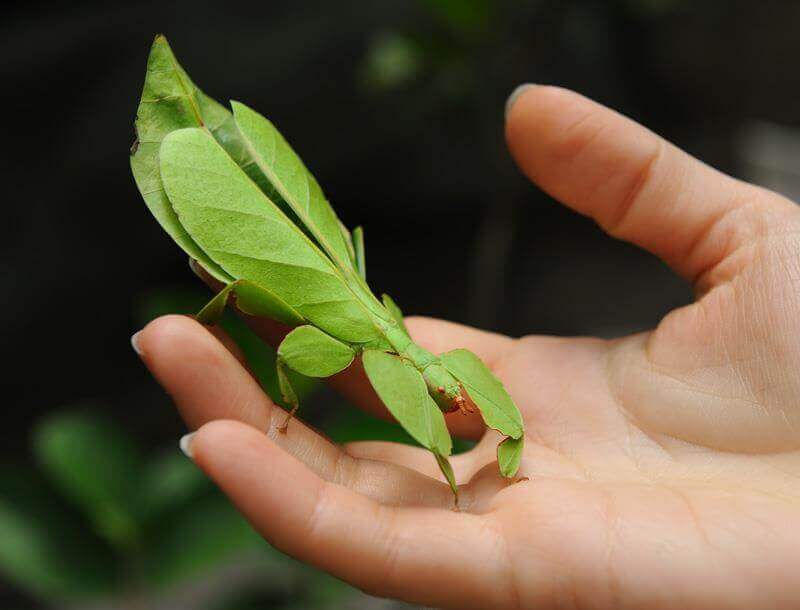 The Phasmida are animals that are tremendously skilled in the art of insect camouflage and mimicry. The term “Phasmids” shares its origins with the word “ghost”. In particular, it’s a term that comes from the Ancient Greek (phasma) which means “appearance” or “spirit”.

Given their name and abilities, it’s worth asking: is camouflage their only means of survival? What do they do to make their methods so effective?

Classified before in the order of the orthoptera (grasshoppers and crickets), they now have their own order, that of the Phasmids. We commonly know them as “stick insects” or “leaf insects” and they constitute a group of more than 3000 species. Most species are tropical, although there are also a couple of them that live temperate climates.

Why do we say they’re skilled in the art of camouflage?

Some people call them insect simulators given their ability to blend in with the landscape. They do this by adapting colors, shapes, and behavior that make them go unnoticed to the senses of other animals.

In addition, most of them are nocturnal and they remain still during the day. This makes them even more difficult to detect.

Thanks to these mechanisms, they’re able to blend in with the vegetation that surrounds them and manage to avoid their predators to a large extent.

In addition to this, they have other defensive abilities against their enemies. For example, some of them have brightly colored structures on their wings, which, when deployed, give them a certain threatening aspect.

However, if they still get detected by a predator, they can resort to thanatosis – in other words, the technique of playing dead. This makes them less appealing to the predator, making them believe that there’s a risk of falling ill if they eat them.

On the other hand, they can also detach some of their limbs as a last resort in the case that a predator catches them. So you see, it’s not just insect camouflage, it’s top-notch survival skills also!

Are all simulator insects the same?

No, not all simulator insects are the same. In fact, we know of three different types:

In addition, there’s such variability in the species, that among the phasmids are the heaviest insects in the world (Heteropteryx dilatata) and the largest ones too (Phobaeticus chani).

The Phasmids of the Iberian Peninsula

Leptynia hispanica is the Iberian stick insect par excellence and doesn’t exceed 2 inches in length in its adult phase. Its body is longitudinally crossed by a white line on a green or brownish-grey background.

Its habitat includes most Mediterranean countries because this is where its food source is located, the common broom (also Scotch broom).

Another genus that lives in the peninsula is Pijnackeria, also distributed in southeastern France. These are greenish-colored stick insects, perhaps slightly smaller than the previous ones we mentioned.

Most phasmid species reproduce sexually, although in some cases parthenogenesis may also occur. However, this isn’t the norm, as it implies a decrease in the genetic variability of the species.

Nevertheless, there’s talk of a stick insect that hasn’t sexually reproduced in a million years. This is Timema’s stick insect (Timema dorotheae).

Scientists at Simon Fraser University in Canada have studied its DNA and discovered a long history of asexual reproduction in this species. These stick insects are able to create genetic clones of themselves, and thus produce offspring. Fascinating, isn’t it?

Asexual reproduction has the advantage of allowing rapid population growth. But the biggest trade-off is that, as they’re identical clones, genes are also identical and no evolution occurs.

Animals that are skilled in the art of camouflage often catch the attention of animal experts. This is due to the curiosity they generate and also because of their amazing features. They’re difficult to detect in nature and therefore difficult to study and identify. As a result, insect camouflage is widely chosen as the subject of numerous studies even today, where much of this information is already available.

It’s certainly important to encourage interest and curiosity for these and other insects in young people since they’re animals that unfairly receive some bad press. We don’t realize that, by protecting and maintaining them, we help keep the planet and its biodiversity alive.

We hope you enjoyed this article and satisfied your curiosity (for now) with these amazing animals that share our beautiful world with us.

Keeping Insects as Pets: Ant Farms
While they might not be your first choice of pet, ant farms can be an excellent way to teach children about the responsibilities of being a pet owner. Read more »
Link copied!
Interesting Articles
Invertebrates
Discover the Golden Tortoise Beetle