Four of the Most Common Animals of Antarctica

The lack of vegetation and wildlife in inland areas forces most of the animals there to concentrate on the coast of Antarctica. These species evolved to endure extremely cold temperatures. Some are endangered, though. 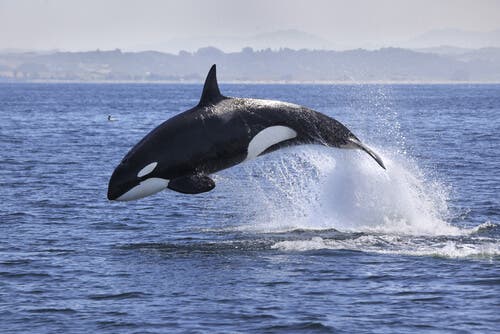 Today we’ll tell you about some of the animals of Antarctica. As you may already know, this is the only continent with no human settlements — beyond temporary scientific expeditions, that is. The habitable area of this continent is a huge mass of ice and rock located at the South Pole, and it’s one of the places with the most extreme living conditions. Continue reading and discover four species of southernmost animals.

Antarctica is the continent located at the south of the planet and pretty much within this polar circle. It’s almost completely covered by snow, so the environmental conditions are extreme and it’s hard for human life to thrive in there.

Almost all of the animal life that inhabits this continent is located in the coastal areas. There’s neither plant nor animal life inland. The sea is the main source of things to eat and this is why most of the animals live by it.

Vertebrates concentrate in the sea areas. However, there are many species that inhabit the areas underneath the ice. For instance, there are invertebrate beings, such as mites or ticks that are well-adapted to the cold. Continue reading to find out more about four of these species.

Orcas are a species of cetacean that belongs to the family of dolphins, even though most people think of it as a whale. They’re black and white in color and the size and position of their spots are unique in every specimen. This is precisely how researchers recognize them.

Orcas are highly intelligent animals, capable of inventing group hunting strategies. Researchers also found they have a complex language and the various groups even have dialects.

Some say that orcas are in danger of extinction, although there isn’t sufficient data to confirm this claim. Scientists suspect there’s more than one type of orca out there. However, they don’t really know the size of the total population to make this news official. In any case, there are international laws that protect them from hunters.

There are up to seven different species of penguins in Antarctica, but the Adélie penguin lives beyond the continent, all the way up to the most remote islands.

This bird weighs about four kilograms and is 27 to 36 inches tall. They’re characterized by having a solid winged black back and a completely white belly. They’re easily distinguishable from other penguin species as their eye rims are white.

These animals are grouped into colonies that vary in size. There’s a colony estimated to have almost half a million penguins on one of the islands. In addition, it’s common for smaller colonies to form around large colonies.

Penguins mate for life and help each other incubate the eggs. Both work together to build a nest using small stones they place with much precision. Then, one parent guards the nest while the other one goes out in search of food.

Many of the animals that live in Antarctica are birds. The Antarctic petrel is one of the two species of petrels that live on these coasts.

This bird feeds on small crustaceans, squid and carrion. It’s common to see them in flocks behind the boats trying to reach the remains of the fishing. They nest in colonies on steep cliffs and rocks. They later spread to many other places in the southern hemisphere even though they breed in Antarctica.

The black and white spots on this bird’s feathers give it the appearance of a checkerboard.

There are two species of sea elephants. One of them inhabits the northern hemisphere and the other one, Antarctica. These animals are related to seals and are the largest in their family.

There’s a huge sexual dimorphism in them. The males can be up to 14 feet long, so they’re about 3 feet larger than the females. Also, they often get to be about 4 tons in weight. That’s about four times heavier than the females. These are among the heaviest animals in Antarctica.

They’re named after the small trunk that males possess, the same that measures between 11 and 16 inches and that they use to intimidate or fight with other males during the breeding season.

Furthermore, the elephant seal population is healthy and stable. However, there’s no concern about their extinction and their survival doesn’t seem to be threatened.

Finally, Antarctica is a continent with an extreme climate. There’s hardly any vegetation and the limited life there is can only be found inland — invertebrates, for the most part. In contrast, there’s a diversity of animal species adapted to the cold and harsh living conditions on the coast.

The Penguin Graveyard in Antarctica
In 2016, a team of researchers found a penguin graveyard in Antarctica. The most likely cause of death was climate change. Read on to learn more. Read more »
Link copied!
Interesting Articles
Wild Animals
5 Animals that Live in Grasslands