Description and Habitat of the Whip Scorpion

What is a whip scorpion? What differentiates them from other scorpions and what's the story behind their name? This arachnid is only known to a few but has a fascinating set of characteristics. 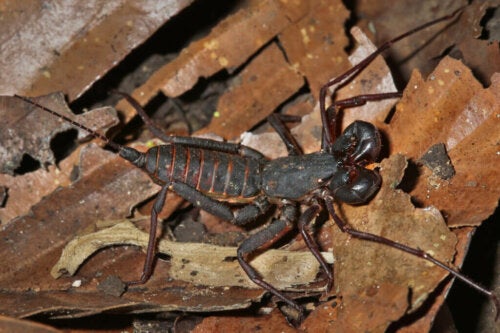 Uropygids are an order of arachnids commonly known as a whip scorpion or vinegaroon. These arthropods are similar to a scorpion, but stingless. Their colloquial name comes from the substance they excrete – an acidic, vinegary scent.

Vinegaroons inhabit tropical and subtropical regions. They live under rocks, logs, and other places where the ambient humidity is high enough.

The appearance of whip scorpions

Vinegaroons are arthropods of the arachnid class and are quite similar to actual scorpions to the naked eye. However, look closely and you’ll see there are many differences. First of all, the whip scorpion has no sting of any kind.

These arachnids are between 3/4 and 8 inches long – depending on the species – and their body divides into two regions: the prosoma (cephalothorax) and the opisthosoma (abdomen). They’re either reddish-brown or darker.

The habitat of whip scorpions

Vinegaroons inhabit areas with high humidity, such as tropical and subtropical regions. They stay in burrows that they dig themselves or in logs, rocks, and other natural debris during the day.

Feeding and reproduction habits of the whip scorpion

These are predatory animals and feed on insects, worms, cockroaches, crickets, and even other arachnids, such as scorpions and spiders in some cases. Their diet in captivity is based on small crickets, cockroaches or Zophoba larvae, mealworm beetles, and other insects.

Reproduction is similar to that of scorpions. Male vinegaroons are more slender than females and you can tell them apart by the segments of their abdomen.

After a dance-like courtship, the male deposits a spermatophore, which the female lodges in her spermatheca. The female then digs a burrow in which she hides to protect her offspring.

Once there’s fertilization, the eggs develop in a structure called an ovisac, which hangs from the female’s abdomen. About 15 to 20 young hatch from the eggs, which the mother will carry on her back when they reach the nymph stage, until the next molt, at which time they’ll be independent.

Where does the name “vinegaroon” come from?

These are harmless animals because the substance that they secrete is harmless to humans. It’s a liquid composed mostly of acetic acid, water, and capric acid.

Its function is both offensive and defensive. The whip scorpions excrete it against their prey in order to weaken their cuticle and capture them more easily with their pedipalps. They can direct the acetic stream against their victims with the pedicel — the segment that joins the prosoma to the opisthosoma.

A whip scorpion in captivity

These arthropods are also bred and kept in captivity, in terrariums adapted to the humidity and temperature conditions they require.

The recommended terrariums for uropygids must be 12 cubic inches with a substrate that allows burrowing, such as coconut fiber, and smooth walls through which they cannot climb.

To reproduce the conditions of their natural habitat, this animal needs an environment with high humidity. Good lighting isn’t necessary since these are nocturnal animals and the temperature must be above 68 degrees Fahrenheit.

These animals are solitary and only get together during the breeding season, so don’t keep two specimens in the same terrarium. They’re quite active, in general, but may go into a state of lethargy during the molting season. Keep in mind that proper humidity is very important for this process.

Characteristics of Four Types of Scorpions
Today's article is about four types of scorpions. These cuties belong to the order of arthropods and are easy to identify. Read more »
Link copied!
Interesting Articles
Invertebrates
Discover How Worms Reproduce

Invertebrates
5 Animals that Feed on Blood

Animals that feed on blood are known as hematophagous. And, although they're not abundant on the planet, they're worth highlighting. Some are surrounded by legends, others harass our pets, and…