The Most Adorable Spiders in the Animal Kingdom

Salticids are small, adorable spiders that love to jump. Among their main characteristics, we can mention their excellent eyesight, their complex entourages, and their peculiar hunting habits. 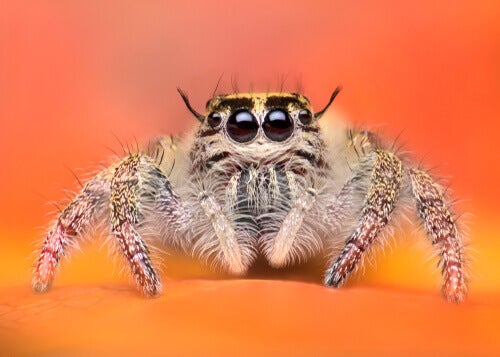 When we think about arachnids, most of us think of 8-legged creatures with a creepy appearance. Like everything in the natural world, within each biological taxon, there exists one key characteristic: a wide variety of species. This diversity expresses itself in distinct ecosystemic colonizations, very different morphological forms, and atypical behaviors. Today, we want to challenge your preconceptions regarding anthropods and show you the most adorable spiders in the animal kingdom.

The class Arachnida includes ticks, spiders, mites, amblypygids, vinegarroons, and many other anthropods with a similarly threatening appearance. But here we have a genus that’s an exception to the rule: the salticid. Would you like to discover the characteristics of these cute little jumping spiders? Are you willing to shed your fear of these hairy 8-legged creatures? If the answer is yes, keep reading.

The most adorable spiders in the animal kingdom

Salticids (Salticidae) are a family of small, jumpy spiders. With more than 6000 known species, they’re a very diverse spider family. In fact, they make up 15% of all known spiders known to date. This may be a surprising fact since many people are completely unaware of their existence.

That’s mainly because of their minuscule size and restless nature. These little anthropods spend the day jumping from one spot to another. Thanks to a very sophisticated hydraulic system, they can cover distances several times their own size in just one bound.

However, despite their endearing appearance, similar to that of a stuffed animal, salticids are innate predators.

Salticids possess a wide variety of predation techniques in comparison with other spider families. In general, they inspect the insects they hunt and ask themselves if they’re worth wasting energy on. This instinctive behavior doesn’t derive from rational thought, but rather evolutionary compromise or trade-off.

Since they’re such small animals, their metabolism is much faster than that of other arachnids. Therefore, failure isn’t a luxury they can afford. Nor can they waste their energy on insects with low nutritional value. This is because, in both cases, they’d expend more energy than they would gain.

Once they identify their prey, these spiders usually create a silk string or “parachute” before dropping down over their target. This way, if they fail, they won’t fall to the ground or blow away with the air current.

Once they make contact with their prey, they inject a venom that leaves their victim immobile to keep them from escaping. But don’t worry, their venom is harmless to humans. What’s more, they never attack people or large vertebrates.

It’s interesting to know that there are scavenger salticids that invade the webs of other larger arachnids. In doing so, they risk their lives to gather the prey that has already been trapped there.

This family has clear sexual dimorphism when it comes to their coloration. This is relatively common among tarantulas but is rarer among other arachnid families. Males tend to possess feathery hairs, color patterns, and, in some cases, front extremities that are disproportionately large.

They use all of these tools in dances and choreographed movements in order to win over female partners and reproduce. We’re looking at a clear case of sexual selection since the most colorful and eye-catching males have the greatest possibilities of leaving descendants. However, they’re also more visible to possible predators.

The last noteworthy characteristic that we want to mention has to do with salticids’ vision. These creatures have eyesight that’s disproportionately complex in comparison to the rest of its systems.

They have eight eyes, which divide into ocelli and secondary eyes. It’s surprising that their vision is more sophisticated than that of dragonflies, who have the greatest eyesight in the animal kingdom.

Just the same, their field of sight is limited by the fact that they can’t turn their heads. Therefore, they must perform certain body movements in order to currently interpret three-dimensional space. Just the same, their eyesight is excellent in comparison to other spiders.

The world of jumping spiders

As you’ve probably already grasped, there are arachnids with such complex and sophisticated behavior and courtships that they remind us of exotic birds and mammals. We can’t go so far as to call this intelligence, but it’s clear that salticids have evolved very differently than other anthropods.

Is it their small size and all of the challenges that this entails? We can’t be sure, but one thing is clear. These adorable spiders have stolen our hearts. Have they stolen yours?

Smiling Spiders: Behavior and Habitat
Smiling spiders have a specific look that actually makes them look like they're smiling. Some seem to wear their 'smiling face' on their back.  Read more »
Link copied!
Interesting Articles
Invertebrates
Scary Looking Insects that Are Harmless

Invertebrates
Just How Dangerous Is the Bullet Ant?

Bullet ant is the common name for the species Paraponera clavata. This nickname refers to the intense pain that this…