The Sicarius Spider and its Lethal Venom

This spider's venom has the potential to produce necrotic lesions. However, it's a fact that its bite's lethality is rather low. 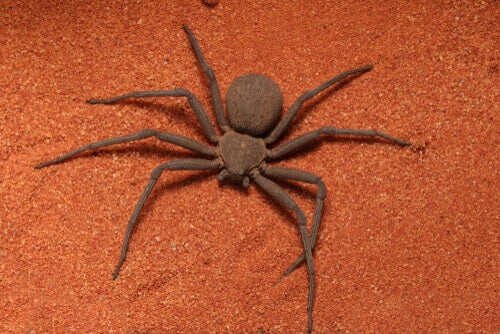 The Sicarius spider belongs to the genus ‘Sicarius’, and people also call it ‘sand spider’, ‘six-eyed spider’, or ‘killer spider’. In fact, its scientific name Sicarius comes from the Latin meaning ‘killer’. These spiders inhabit the African deserts and arid areas of South and Central America.

Currently, 124 species are known to belong to this family and are distributed in two genera: Loxosceles, with 103 species and Sicarius, with 21. All these species are considered of medical importance, as their venom carries an agent that induces skin necrosis. Out of the two genera, the venom of Sicarius spiders is reported as the most toxic.

Here are some characteristics that define this interesting invertebrate:

What do these spiders eat?

All Sicarius spiders are carnivorous, although there’s little data on their usual prey. However, there are testimonies that claim that captured species, both in Africa and America, eat cockroaches, ants, crickets, scorpions, and spiders in their natural environment. In addition, there’s no evidence that they hunt or eat any vertebrates.

Do they deserve the reputation of killers?

First of all, it’s appropriate to mention that the severity of this spider’s bite will greatly depend on several factors:

Is it common for this spider to inhabit the human environment?

We should note, that while researching, we found no reports of captured Sicarius spiders in urban environments. However, in the case of spiders of the genus loxoceles (also from the Sicarius family), there are some reports:

Thus, there is evidence that the risk of getting a bite from spiders in this family is small even in places with heavy infestation.

What to expect when a Sicarius spider bites?

It’s important to know that there are several categories of spider bites in this case:

In addition to spider venom, experts have also isolated these enzymes from bacteria and fungi.

What can cause dermonecrosis if you live in a non-endemic area for Sicarius spiders?

There are many diseases that can cause necrotic skin lesions but, unfortunately, they aren’t common knowledge. In fact, expert arachnologists think that skin loxoscelism is more common than it should be.

Some of the reported misdiagnoses include Lyme borreliosis, chemical burn, anthrax, and methodicline-resistant Staphylococcus aureus infection, among others.

Have you ever seen a Sicarius spider in person before? We hope you enjoyed learning about them today.

8 of the World’s Most Dangerous Spiders
Not everyone likes spiders. In fact, people either love or hate these animals. Some people even have developed a phobia of them -- called Arachnophobia -- without having any real reason at all. Read more »

Vetter, R.S. & D.K. Barger. 2002. An infestation of 2,055 brown recluse spiders (Araneae: Sicariidae) and no envenomations in a Kansas home: implications for bite diagnoses in nonendemic areas. Journal of Medical Entomology 39:948–951.