Five Poisonous Animals that Don't Seem to Be

Some poisonous animals have been used as pets as they don't appear to be threatening. Among these animals are birds, mammals, mollusks, and amphibians. 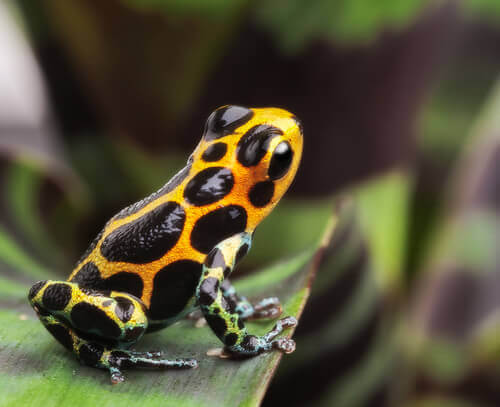 Poison is one of the main defenses in the animal kingdom. It’s also one of the main attack strategies. Although we’re used to associating poisonous animals with venomous snakes, jellyfish, or spiders, there are lots of species that are poisonous and may not seem like it.

There are also different types of poisons. Although we’re not talking about the most dangerous animals, these animals are worth knowing about. Some of them may even be adopted as pets. In fact, many people are unaware of their dangers.

Curiously, there are also poisonous birds. In fact, there are three types of birds from New Guinea that ingest the same beetles as arrow frogs. Then, they use the venom to defend themselves against predators and parasites. These birds are the blue-capped ifrit, the little strikethrush, and the pitohui.

Their poison affects both the nervous system and the heart. This is why these poisonous animals cause cardiorespiratory arrest. However, it’s difficult for the poison to reach the bloodstream. Just handling these birds for scientific purposes can cause burns.

The slow loris is a species of primate that inhabits Sumatra and other Asian countries. Unfortunately, many people like to keep this primate as a pet, even though it’s one of the few mammals that’s actually poisonous.

In fact, this animal has an inflammatory toxin produced by a gland on their arm, which they lick. Then, the poison mixes with their saliva, making their bite toxic. In addition, females actually smear their young with poison saliva to defend them against possible dangers.

This member of Australian fauna is one of the only mammals that lays eggs. It’s also one of our poisonous animals that don’t seem to be.

In general, the platypus is a strange animal; they’re mammals with beaks that swim. They also have hollow spurs with venom that they produce seasonally.

Platypuses use this venom to compete with other males. In fact, they produce the toxin during mating season in order to fight with other platypuses. The toxin isn’t deadly, but it can be excruciatingly painful.

Some species, such as the northern short-tailed shrew, are poisonous. This animal’s teeth aren’t hollow, but they have a groove that serves as a channel for the poison. Then, the poison acts as a paralyzing agent and a preservative. However, it allows the shrew to keep its prey alive.

Shrews consume a lot of food, and thanks to this poison, they can actually store durable food during the winter months. Although they’re poisonous animals, this toxin isn’t a threat to humans.

This sea snail may seem harmless and rather pretty, but they actually have a needle-shaped tooth, which injects a paralyzing venom. In fact, this tooth is released like an arrow when the animal targets a victim. Then, the toxin causes disorientation, paralysis, and shock. In this case, this poisonous animal is dangerous to humans. This makes it the most dangerous mollusk for people, but fortunately they aren’t too common.