How Much Do You Know about Army Ants?

Army ants were the protagonists of the classic movie The Naked Jungle. These migratory and predatory species move in groups of 10,000 to 200,000, and devour most of the invertebrates that they find in their path. 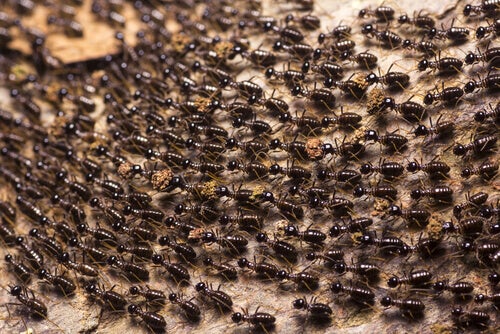 Army ants is the name given to some 200 species of predatory and nomadic hymenoptera. But, despite their bad reputation, they also help control the enormous numbers of insect inhabitants in the terrains that they roam through.

Ants without a permanent nest

Known for their forays into jungles in search of food, these ants were immortalized in the classic movie, The Naked Jungle (1954), starring Charlton Heston, which tells the story of an attack of army ants on a Brazilian cocoa plantation.

These insects, also known as warrior or legionary ants, are present in most tropical and subtropical areas of the planet. They move about in groups of between 10,000 and 200,000 adult workers, which can cover surfaces up to 65 feet wide and 650 feet long.

In addition to their predatory nature, army ants stand out for their lack of permanent nests. In fact, the colonies of these insects move around during most of their existence.

Nomads and predators are two words that perfectly define army ants, immortalized in the movie classic The Naked Jungle.

Ants are eusocial insects that belong to the order of hymenoptera. There are about 14,000 known species, but it’s estimated that there may be up to 22,000. And, as already mentioned, about 200 of them are known as army ants.

These species have two behavioral phases: a stationary (or sedentary) phase and a nomadic (or wandering) phase. In the stationary phase, which lasts between two and three weeks, the ants reduce their activity. During this time the larvae transform into pupae and the queen’s abdominal area increases in size due to the large number of eggs she produces.

In the nomadic phase, army ants move about during the day – although some species are active at night – in search of food. During these forays they’re accompanied by insect-hunting birds waiting for the small vertebrates which flee from the marauding ants.

What about army ants’ nests?

Army ants make their nests (known as bivouacs) at night with their own bodies. They organize themselves into a sort of huge ball in a tree trunk or a burrow that they dig for this purpose.

In this truly living nest, the youngest ants stay in the interior and the older ones on the exterior. The bivouac has a large number of passages and chambers where, in addition to food, the queen, larvae, and eggs are found.

In the face of even the slightest disturbance, the soldier ants move to the top of the nest to defend it with their powerful jaws and, in the case of some species, also with their stings. The soldiers also protect the colony as it moves about.

Legionary ants feed primarily on insects. A colony can consume up to 100,000 of these invertebrates every day. As such, the role they play in controlling the large number of these animals that populate the forests is fundamental.

But they also often catch spiders and small vertebrates. In addition, they’ve been known to sometimes feed on turtle eggs. And some species climb trees in search of bird nests.

To hunt their prey, these armies usually use a method known as swarming. Groups will separate themselves from the central mass in different directions, like in the roots of a tree. In this way, they trap their prey and it’s almost impossible for it to escape.

They also make forays in columns. This means that some team members separate from the main route and set up search parties. However you look at it, you certainly don’t want to get stuck in the army ants’ path!

Here are Some Fascinating Fun Facts About Ants
You've probably never given them much thought, but there are actually lots of fun facts worth learning about ants. Keep reading to find out more! Read more »
Link copied!
Interesting Articles
Invertebrates
What Are the Differences Between Octopuses and Squid?

Sea stars (or starfish) are invertebrate animals characterized by five arms that end in a point. They're named after their…