Nature enshrines behaviors as interesting as that of the Anergates atratulus ant, which need to parasitize other members of the Formicidae family in order to survive. 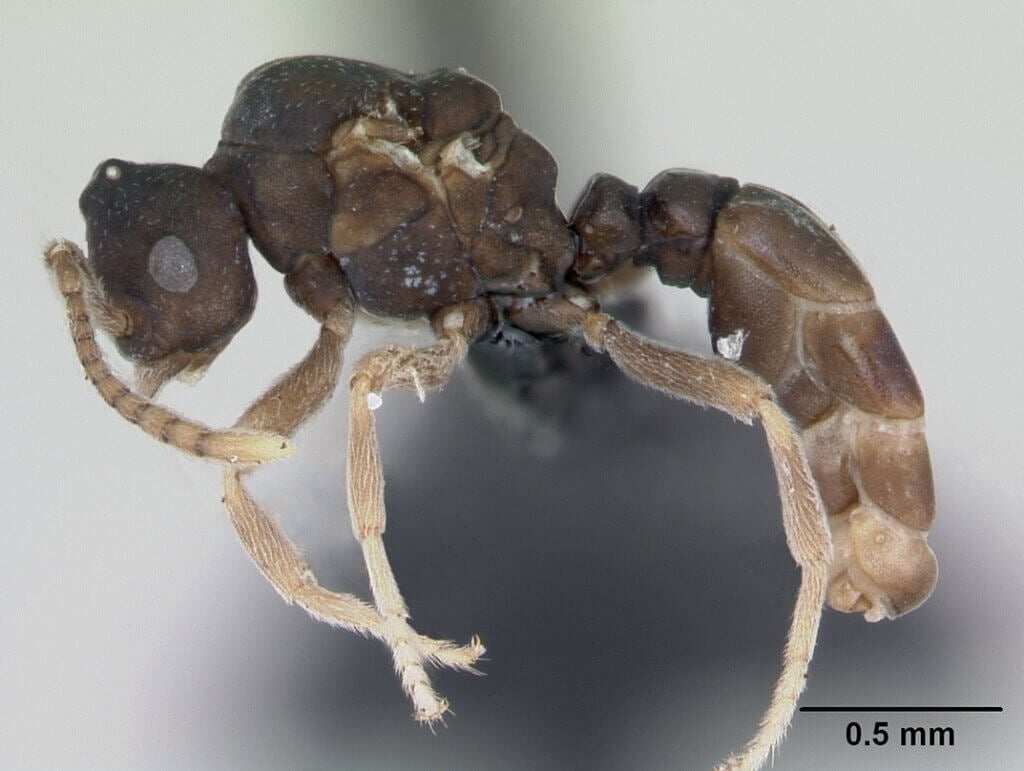 In nature, there are living beings as amazing as the Anergates atratulus, a unique species of ants with a peculiar behavior. In addition, they display such a unique appearance allowing us to differentiate them from other ants.

These insects need the presence of another species of ants in order to survive. Here’s a little more about this curious behavior.

A curious detail is that ants tend to have an eusociality organized in castes: queen, workers, and soldiers. However, the hierarchy of this species is a little different: it has several queens and males, but its structure lacks workers.

Physical characteristics of the Anergates genus

First, as a parasitic species, it presents traits associated with this peculiar way of life. These range from the general degeneration of the jaws to the palpi or antennae. This is one of the reasons why both females and males show a high specialization of parasitism.

Furthermore, they have a very typical appearance, with a smaller size than that of their hosts. Hence, differentiating between females and males is easy thanks to their general appearance and their sexual dimorphism. Observations have shown that females have wings, while males don’t. This is because the role of adult males is merely reproductive. They are born, reproduce, and die in the same nest.

This species can be found in Euro-Siberia and North America. In Euro-Siberia specifically, it’s found in Great Britain, in the southeastern regions where it was discovered in 1912.

Meanwhile, its presence in North America refers to the regions where its host species is located, mainly in Eastern U.S.A.

Although in specialized literature, and in the species classification, it’s mentioned as Anergates atratulus, it also receives another name. Some taxonomists call it Tetramorium atratulum, perhaps because this is the genus that the Anergates parasitize.

Normally, the parasites coexist with the fertile queen of their host colony. However, this behavior has never been observed in Anergates. Therefore, the colonies of Anergates atratulus have a period of 2-3 years to give birth to the next generation. This is because they only stay in the host nest for as long as the host workers are young. Consequently, even among the obligate parasites, they are a rarity in itself.

Researchers have tried to capture how the Anergates queens enter the host nests, but they were unsuccessful.

Some studies have conducted experiments in order to analyze the adoption process. It appears that the Anergates queen infiltrates the nest of the host species without being detected or with the help of a host worker.

Once inside the nest, she controls the workers of the colony, ordering them to kill their own queen. After the queen has died, the following are the males and the other possible queens of the host species. Once the nest is under control, the Anergates queen lays eggs to ensure the continuity of the species.

There was only one experiment of Crawley in 1912, in which the Anergates didn’t kill the host queen. However, the other members were killed the following week. Moreover, in this experiment, the Anergates queen died before laying eggs. Therefore, the scientists suggested that their typical modus operandi consists in appropriating orphan nests that still have members of the host species.

Which are their host species?

This parasite species tends to be present in the nests of two specific species of the genus Tetramorium: T. caespitum and T. impurum. However, its presence has also been recorded in Italy in the nest of another species of the genus: T. diomedeum. Nonetheless, it is also true that this case is a bit strange because they were at a low altitude (300 meters, 980 feet).

In conclusion, even within groups of animals sharing certain characteristics, there are exceptions such as the Anergates atratulus. These ants have fascinating behavior different from that of other obligate parasites.

Discovering this type of behavior sparks interest in other behavior in nature. An example can be the relationship between the parasite and its host.

Ladybird Beetle – Characteristics and Behavior
When we think of a ladybird beetle, we envision an insect with a blackhead and a red back with its characteristic black spots. Read more »
Link copied!
Interesting Articles
Invertebrates
The Giant African Land Snail in Captivity