Just How Dangerous Is the Bullet Ant?

The bullet ant stands out among the 950,000 species of known insects due to the pain caused by its sting. Discover more about this fearsome insect. 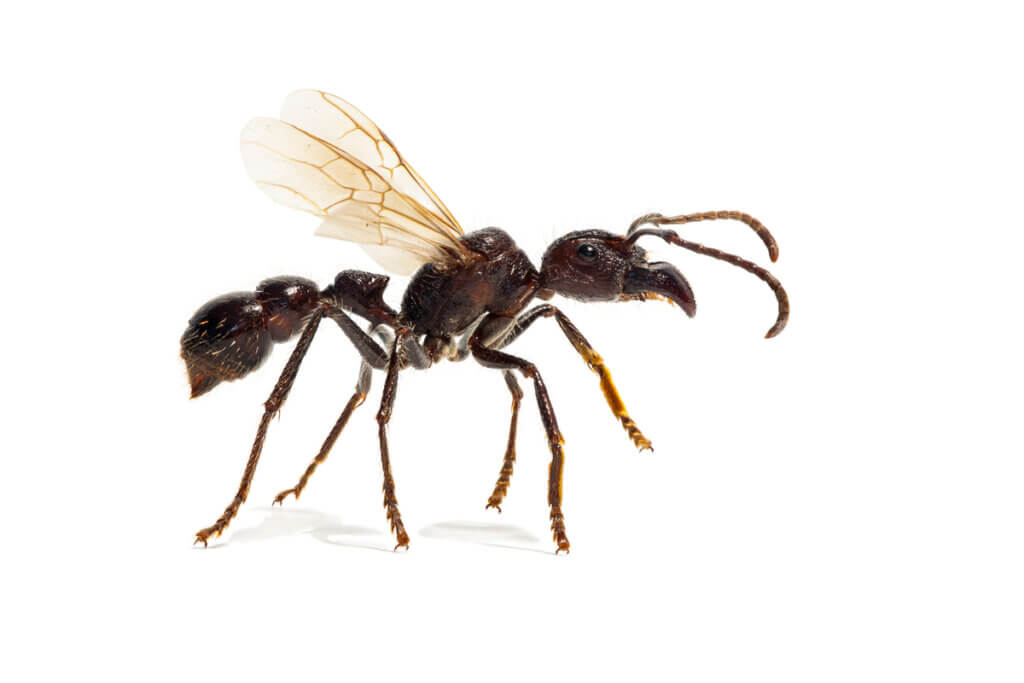 Bullet ant is the common name for the species Paraponera clavata. This nickname refers to the intense pain that this insect’s bite produces, comparing it to the pain produced by a bullet. According to reports, victims experience agonizing discomfort for the next 12 to 24 hours. Therefore, many refer to this 6-legged foe as the “24 ant” or the “24-hour ant”.

In addition to its fame for inflicting a pain described as “pure, intense, brilliant” by the American entomologist Justin Schmidt, of the Biological Institute of the University of Arizona, it also stands out for its size. This ant measures about 1 inch long.

According to the current classification, the bullet ant is a member of the genus Paraponera, of the family Formicidae, belonging to the order Hymenoptera. For a long time, this was the only species of its genus and tribe, until 1994 when its first extinct relative was found. The famous fossil, classified as Paraponera dieteri, was found embedded in amber in the Dominican Republic.

The fossilized ant Paraponera dieteri, existed during the early Miocene period, 15 to 45 million years ago. The excellent conservation of the fossil allowed exhaustive comparisons between the two species.

How to recognize the bullet ant

These ants are remarkable for their size, as the specimens of the working class reach 0.7 and 1.2 inches in length. At first glance, they look like thick, reddish-black, wingless wasps. Each of the antennae forms its own wide “V”.

Also, like all primitive monomorphs, this ant shows no polymorphism in the working caste. Thus, the queen is not much larger than the workers. It is important to know that these ants are not naturally aggressive. However, they become unrestrained when they defend the nest. According to reports, when they act defensively they produce a shrill sound as they sting fiercely.

Where do people run the risk of crossing paths with a bullet ant?

Bullet ants are spread throughout all of Central and South America, especially in the humid Neotropic ecozone. This means that we can come across these ants in the area that includes Honduras, El Salvador, Nicaragua, and Costa Rica, and extends to Venezuela, Colombia, Ecuador, Peru, Bolivia, and Brazil.

In general, bullet ant colonies are found in lowland areas, at elevations ranging from sea level to 750 meters. However, experts have collected specimens at elevations of 1500 meters. In terms of numbers, colonies may consist of a few dozen ants up to a hundred individuals. Therefore, these are small colonies in comparison to those of other ants.

In general, these groupings seek to establish themselves at the base of the trees. Although these predators are primarily insectivorous, they also feed on plant sap and nectar. Thus, it’s usual for workers to work by drilling into the tree in the area near the nest, looking for small arthropods and nectar.

Is there a predilection for a specific tree for the nesting of this ant?

Studies addressing the possible selectivity of the bullet ant of a tree species suggest that there is no such selectivity. In general, the ant will inhabit trees with extrafloral buttresses and nectaries that provide access to the forest canopy.

Nests were most common under the canopy of Faramea occidentalis and Trichilia tuberculata, but these trees are also the most abundant in this forest.

In Costa Rica, nests were present with a higher frequency than would be expected based on the abundance of Alseis blackiana, Tabernaemontana arborea, Virola sebifera, Guarea guidonia and Oenocarpus mapora trees.

The terrifying bite of the bullet ant: Painful but not deadly

We know that many wasps, bees, and ants (order Hymenoptera) generate toxic or poisonous substances as a defensive method. Thus, the females of a large majority of hymenoptera have developed a stinger at the end of their abdomen. This weapon constitutes an evolutionary adaptation of the oviposition channel (Aculeata infraorder).

It’s interesting to know that the ants of the Formicidae family generally attack through bites. However, some species, including bullet ants, also do so through stings from their stinger. The sting, however, is not usually fatal to humans.

Why does this ant’s bite hurt so much?

It’s important to note that the intensity of pain that an insect bite causes depends on several factors. For example, the size of the stinging insect, the amount of venom it injects, and most importantly, the chemical properties of the pain-inducing constituents.

Among the best-known substances in ant bites is formic acid, which we find in the sting of the subfamily Formicinae. We also find it in bee stings. But that isn’t the only substance, for example, red fire ants inject an alkaloid from the piperidine group, solenopsin.

You may already be familiar with the physiological effects of some alkaloids, such as morphine, ephedrine, and nicotine. Insect bites that release formic acid and alkaloids are just one wave in the ocean of bullet ant bite pain. The toxin that the bullet ant produces is poneratoxin.

What do we know about this powerful toxin?

Ponatoxin is a small protein that interferes with the function of sodium ion channels. Dysfunction of these channels interferes, for example, with the ability of nerve cells to send electrical signals from one site to another. The muscles of the body need neuronal control for their function.

Thus, when a factor interferes with the function of nerve cells, it can cause pain and paralysis. In fact, there’s a fine line between pain and numbness caused by nerve cell dysfunction. Thus, this neurotoxin can cause waves of extreme pain, cold sweats, nausea, vomiting, and even abnormal heart rhythms.

The sting can cause lymphadenopathy (lymph node disorders), edema, tachycardia, and the appearance of fresh blood in the victim’s stool. This toxin is currently being investigated for possible medical applications.

The ritual use of bites among indigenous communities

It’s interesting to note that some indigenous Amazonian populations in Brazil and French Guiana use the intentional sting of these ants. These are initiation rites for children, at the beginning of puberty and also in ceremonies to obtain a higher social status.

First, they numb the ants by immersing them in a natural sedative. Then, the shaman lights 80 ants in gloves made of leaves, similar to an oven mitt, with the stingers facing inward. When the ants regain consciousness, the child slips his hands into the gloves.

The goal of this initiation rite is to keep the glove on for five minutes. When it is over, the ant’s venom paralyzes the child’s hand and part of his arm, which may shake uncontrollably for days.

Interestingly, the members of these tribes who practice this ritual have unusual longevity. This has suggested that the poison may have effects that somehow strengthen the individual’s immune system.

Five Poisonous Animals that Don’t Seem to Be
There's so much we don't know about the animal kingdom. In this article, we'll tell you about five surprising poisonous animals. Read more »
Link copied!
Interesting Articles
Invertebrates
Waggle Dance: The Dance of the Bees