The 10 Most Poisonous Animals in the World

In this very interesting article, discover the 10 most poisonous animals in the world. Read on to learn more! 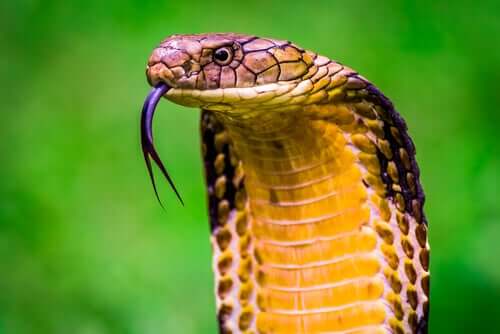 Some animal species produce harmful chemicals that they use to defend themselves through stings, bites, or pricks. This article will tell you what the most poisonous animals in the world are. They’re known as “passive killers”, as the fact that they contain these toxins doesn’t necessarily mean they hurt or kill on purpose.

The most poisonous animals in the world

Many animals on the planet can be lethal to humans and other species. For a “poisonous” animal, this mechanism requires a great effort, takes a lot of energy from them, and detracts hours from their days. Because of this, they never attack for no reason. These are the most dangerous animals if they feel threatened:

This is one of the animals that has caused most human deaths in recent times. The venom it expels is deadly because it attacks the nervous system, heart, and skin cells. It’s also very painful. Many victims die from drowning because they go into shock when they’re stung by a jellyfish. Even those who survive may spend weeks hospitalized due to excruciating pain.

We continue in the waters to name the second of the most poisonous animals in the world. This species inhabits almost all the seas on the planet and is the most dangerous snake. Its venom is 10 times stronger than a cobra’s and its bite is lethal to humans.

This is one of the most venomous snakes in the world, as well as the longest. It can measure up to 19 feet (6 meters) long and a single bite from this snake can kill a human being, as well as an adult elephant. The venom it produces is perhaps less toxic than the venom of other reptiles, but the difference is that the king cobra snake delivers more of it.

This animal got its name because it looks like a rock. Its appearance allows it to camouflage itself on the ocean floor and there it patiently waits for prey to appear. It belongs to the Actinopterygii class because their fins are supported by bony spines. Merely touching that part of its body results in death because it releases a venom just as powerful as a cobra’s, which is also very painful.

Its beautiful color is directly proportional to its lethal power. One drop of its venom can kill up to 10 people, although deaths are rare. Once someone is bitten by a cone snail, signs of poisoning may manifest immediately or after a few days. Their venom causes pain, swelling, tingling, and numbness. In more severe cases, it causes respiratory failure, vision changes, and muscle paralysis.

This is the most poisonous amphibian that exists. Each frog carries enough venom to kill between 20 and 30 people, although there are no reported human deaths through poison dart frog venom. In ancient times, natives rubbed the tips of their arrows on the backs of these frogs to make their weapons even more lethal.

This is one of the most poisonous animals in the world that attracts attention due to its colors. This small, golf ball-like octopus has enough venom to kill up to 25 people within minutes. There’s still no known antidote for its venom. Although its bite is painless and many seem harmless at the beginning, it causes muscle weakness, numbness, and shortness of breath in no time. This octopus lives in the Pacific and Indian Oceans.

Another snake in the list of the most poisonous animals in the world. It lives in Africa and its skin can be green or metallic gray. This snake is very fast and territorial. Before it attacks, it makes a sound as a warning. It can inject 100 mg of venom with each bite. 15 mg of its venom is capable of killing a person.

This is a very dangerous species because its venom is powerful and causes excruciating pain. In higher proportions, its toxic venom causes fever, seizures, paralysis, and then death. Its bite can kill a child, a senior citizen, or a sick person.

This is the last animal on this list of the most poisonous animals in the world. It gets its name because female black widow spiders eat males after mating. They usually exhibit red markings in their back bodies. If a person who was bitten by this spider doesn’t get adequate and timely treatment, they can die.

Sea Snakes: Poisonous and Paradoxical
Closely linked to the cobras, sea snakes differ from their terrestrial relatives in that its body is adapted to withstand immersion in deep waters. Read more »
Link copied!
Interesting Articles
Mammals
What Is an Animal Generation?