This species is critically endangered, largely due to an infectious fungus that's causing them to die off. 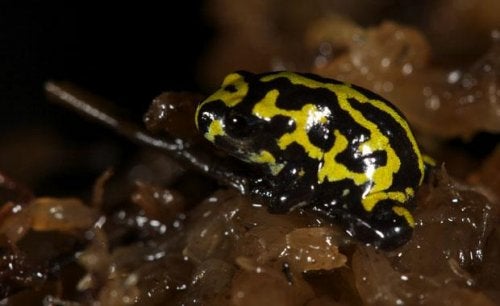 The corroboree frog is an iconic amphibian in Australia. The colorful patterns on their bodies, their venomous capabilities, and the gradual decline in their population have made them a major subject of research and national projects to keep them from becoming extinct.

Depending on the region it’s from, a corroboree frog may have one “pattern” or another on its body. While the northern corroboree frog has a black base with yellow stripes, the southern version is the inverse: yellow with black stripes.

Despite their small size (less than 2 inches), the color of their skin is a warning to predators about the extremely poisonous alkaloids they can secrete. The corroboree frog mostly eats small invertebrates, especially carpenter ants.

They tend to live in seasonal wetlands and the green areas around the Australian Alps. During the winter, they hibernate under tree trunks, leaves, or whatever other shelter they can find. They’re more active during the rest of the year, even though, unlike most other amphibians, they walk, rather than jump.

They generally start to reproduce when summer begins. During the summer months, males will start to build nests on top of moss and other vegetation close to water. Once they’ve finished with that, they sing songs to try to court females and then reproduce.

Females don’t lay very many eggs compared to other kinds of frogs. They’ll generally lay 15-40 per cycle. Like some other species, males can continue to reproduce with other females in the same nest.

The embryos develop until they reach the diapause phase. This is where they stop growing until the fall rains, when they’ll start to hatch. From there, the tadpoles will go towards the nearest source of water to swim and feed on their own. Once the next summer comes, they’ll start to metamorphose and take their adult form.

The corroboree frog: threats and conservation

According to Australia’s Department of the Environment and Energy, the populations of both species of corroboree frog started to decline in the 1980s. They say that the main culprit of this decline is the “amphibian chytrid fungus,” or Batrachochytrium dendrobatidis.

This fungus gives the frogs a disease called chytridiomycosis. It’s not just a problem for this Australian species, either. It has also decimated a lot of the diversity of amphibians across the Americas.

In the case of Australia, the fungus spreads partly because of the common eastern froglet (Crinia signifera). This frog species is a carrier for the fungus, and can be very infectious without showing any signs of illness. That makes it spread much more easily to the other species.

Another big threat to the corroboree frog is climate change. The extreme droughts it is causing have led to a gradual destruction of their habitat. A lack of nearby sources of water kills these frogs off because their eggs and tadpoles depend on it completely.

Right now, the International Union for Conservation of Nature (IUCN), classifies both the northern and southern species as “critically endangered.” This has led the Australian government to develop some national plans to conserve the species long-term, along with creating several national parks and nature reserves.

Meet the Golden Frog
The golden frog is so poisonous that just a single milligram of his poison can kill 10,000 mice or a pair of elephants. Find out more! Read more »
Link copied!
Interesting Articles
Amphibians
Phantasmal Poison Frog: Care and Breeding in Captivity