The Importance of Krill in the Ocean's Ecosystems

Krill are often called the cornerstone of the ocean's ecosystems. They're the most abundant crustaceans in the world, and are a part of the basic diet for many animals like whiles, seals, fish, squid, penguins, and sea birds. 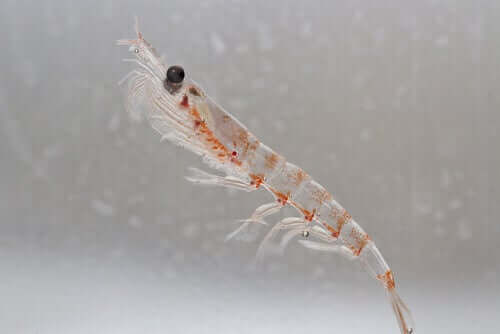 Krill is a blanket term we use to describe 86 different species of crustaceans that inhabit the ocean. They’re part of the Euphausiacea order, and are part of the zooplankton that feed directly off the phytoplankton in the oceans. Krill also have a lot of importance in our ocean’s ecosystem.

There are three especially well-known species, because they’re a target of commercial fishing. Those are Antarctic krill, Pacific krill, and Northern krill. They belong to the species Euphausia superba, Euphausia pacifica, and Meganyctiphanes novergica, respectively.

Adult krill tend to grow to anywhere from 2-4.7 inches long. Even in their larval stages, krill are still a part of the sea’s zooplankton.

Strength in unity for the krill in the oceans’ ecosystems

One interesting thing about krill in ecological terms is that they’re highly social. As they grow into adults, they start to form massive groups, or shoals.

The size of these shoals varies pretty widely. Scientists have seen groups from a few square feet wide, to groups as big as 115 square miles. If you don’t count bacteria, these mile-long shoals of krill are the largest biomass on the entire planet.

What’s the importance of krill biomass in the ocean’s ecosystems?

Remember, the food chain is a linear series of links that begin with autotrophs. These are organisms that get their food from light or chemicals in their environment. To give you an example, that’s what phytoplankton do with chlorophyll and the sun’s radiation.

That chain keeps on going until the autotrophs become the food source for herbivorous organisms. That’s the case with the phytoplankton that krill eat. This link in the chain, of course, goes still further. These herbivores are generally what other larger creatures eat. That’s where you start to see predators like the lion, bear, or human.

The chain ends with detritivores. These are the organisms that break down the organic matter in their environment. Earthworms are one of the most common examples of that. This part of the chain also includes other decomposing organisms (the microbiome) like fungi and bacteria.

All the different parts of the food chain are linked to each other, no matter how far down the line they are. Every living being relies on this chain, and every part of it symbolizes a different trophic level.

As we said earlier, krill biomass may be the largest of all the multi-cellular animal species on the planet. This has led experts to say that krill are the most abundant and successful animals on planet Earth.

They’re exclusively sea animals, and you’ll see them in every ocean in the world. They may live at depths of 300 feet, or over 1,000, depending on the subspecies in question. Their distribution often has a lot to do with the water temperatures of the areas they live in.

Their presence in specific areas also has to do with some other particularities of the ocean’s ecosystems. That includes areas with upwellings. Upwellings are basically what happens when water from the ocean’s depths (rich in minerals and other nutrients) rises up to the surface.

Krill are able to travel great vertical distances. In most cases, shoals of krill will stay deep underwater during the day, and only rise to the surface at night.

This is also a fundamental part of their diet. Many species make long vertical migrations every single day. They can go up to 600 feet in a single night. We don’t know why they occasionally show up at the surface during the day.

Experts hope that we can get more information about their vertical migrations. From there, they may be able to better understand the importance of krill and their biological cycles in the oceans’ ecosystems.

The importance of krill in the oceans’ ecosystems

Krill have a massive reserve of trace metals, vitamin A, various B-group vitamins, and essential fatty acids. Krill paste or other products derived from this animal are great for animals and in therapeutic diets for humans.

But their importance is mainly in terms of the ecosystem, because krill are a direct part of the diet of many animals. They’re food for everything from whales and seals to all kinds of species of fish, birds, and even humans, although we don’t rely too much on them.

In other words, they may seem small, and they may not be a big part of our daily lives, but krill are massively important to the oceans’ and the world’s ecosystems.

Cetacean Species and Their Classification
Over the years, many scientists have dedicated themselves to the study and classification of cetacean species. Learn all about them in this article. Read more »
Link copied!
Interesting Articles
Invertebrates
Pathogens and Diseases: Can a Fly Be a Disease Carrier?