The Lifecycle of a Common Housefly

The common housefly is an everyday companion in many people's lives but could you describe its life cycle? Stick around, we're about to tell you all about it. 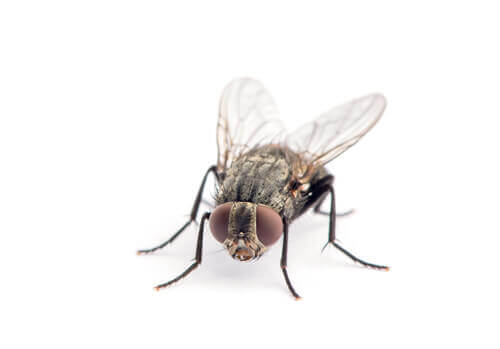 The common housefly (Musca domestica) is one of the most commonly recognized and widespread insects throughout the world. House flies are more associated with urban areas because garbage and feces are their preferred habitat for larval development. Their most preferred places for this purpose are garbage containers, manure, and mammalian slaughterhouses.

Furthermore, houseflies mainly inhabit temperate regions. They’re most abundant during hot seasons, but some adults can survive the winter season in warmer locations.

Generally, the life cycle of a housefly has four stages: egg, larva or worm, pupa, and adult. These insects have an incredible ability to reproduce; however, their lifespan is usually short.

Houseflies reproduce at an extremely high rate in comparison to other species of flies. In fact, they can complete their life cycle in just 10 days, so there can be up to 12 generations during one single summer.

It all starts with an egg

The female will lay these eggs in 5 to 6 batches of 75 to 150 eggs over the course of three to four days. The eggs take between eight and 20 hours to hatch.

Once the eggs hatch, the larvae dig into the feces with their two mouth hooks and absorb nutrients from the material. There, they progress into the first of the three larval stages. During this part of the fly’s life cycle, the larvae are also known as maggots.

The worms grow rapidly and must molt before each larval stage. Each one lasts from three days (in temperate temperatures) to eight weeks (in colder climates). Fully developed larvae are 3/8 to 1/2 inches long and yellowish-white. Their bodies are smooth and shiny.

The pupa of the common housefly

The larval stage is superseded by the pupa. After their third molt, the larvae will bury themselves deep in the substance they’ve been feeding on. The larvae prefer pig, horse, and human feces over cow feces.

Then, their skins will darken and harden in the pupal stage. Within this protective shell, the insect will fully develop the body segments and appendages of an adult housefly.

The only visible addition to the emerging housefly is a swollen bump on their head, which they use to break through the shell. Since the house fly doesn’t have teeth or jaws to chew on, they use this fluid-filled pouch to pierce through the pupae shell. The lump disappears once the fly fully emerges,

The adult stage of a common housefly

After this process, the new adult common housefly emerges and has a maximum of three months to reproduce before dying. The average lifespan of a housefly is usually even shorter – 21 days as they have so many predators.

The role of a common housefly in forensic investigation

As you can see, the housefly has legal, medical, and veterinary importance. Interestingly, they’re often the first to colonize a corpse, often within minutes of exposure if allowed access to a body. In fact, adults feed on body secretions, including blood, and pregnant females quickly lay their eggs on the carcass.

Eggs are known to hatch in a time-dependent temperature. Thus, taking advantage of these temporary courses, the police or forensic entomologists collect these specimens. They use them to calculate the postmortem interval (PMI) of a body.

The contributions of houseflies

Finally, these insects seem disgusting to us but it’s important to remember they have a crucial role in the ecosystem. This is because they tirelessly decompose and recycle organic material. It’s for this reason that houseflies are inextricably linked to humans and our urban areas. Particularly to the high densities of waste we generate.

Pathogens and Diseases: Can a Fly Be a Disease Carrier?
A fly can be a disease carrier. They can carry and transfer bacteria, germs, and fungi to surfaces, human bodies, animals, or food. Learn more up next! Read more »
Link copied!
Interesting Articles
Invertebrates
The Cricket: Is It a Pest or Good Luck?