Today we want to take a moment to analyze a major problem that plagues big cities around the world: pigeon overpopulation. 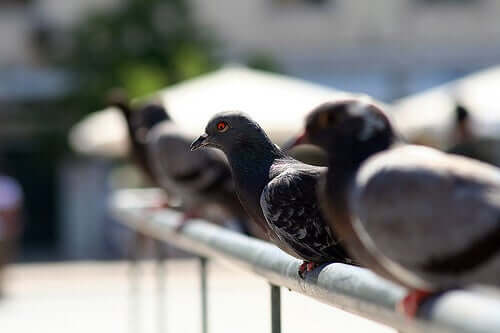 Big cities around the world are constantly encountering new problems as their number of inhabitants increases. Water and air pollution, excessive noise, traffic jams, garbage buildup and, of course, pigeons. Many consider pigeons in big cities to be a plague. However, it’s important to find ways to resolve the issue without violating the rights of these animals.

A winged reason for worry

From symbols of peace to rats with wings, there are all sorts of opinions when it comes to pigeons. On the one hand, we have the tender image of senior citizens feeding pigeons in the park and children chasing after them. On the other hand, many citizens find the overpopulation of these birds and the nuisance they cause to be quite frustrating… Especially when they poop on your clean car, or you!!

Pigeons are clearly a plague in big cities, and the issue is only getting worse. That’s why there are so many companies and entities that offer products and techniques to reduce the problems that these animals cause. However, the methods they propose are not always all that effective. And, what’s more, some of them aren’t very ethical.

That being said, we have to realize that our problems with pigeons will only worsen as big cities continue to grow. For that reason, controlling the pigeon population is a reason for concern and action for the authorities of these urban neighborhoods.

Pigeons, a difficult plague to handle in many big cities, pose a challenge when it comes to population control, especially without resorting to unethical measures.

Why are pigeons such a problem in big cities?

There are many reasons why people are in favor of keeping pigeon populations under control. Among the most important arguments, we find the following:

Pigeons have adapted perfectly to living alongside humans

But have you ever stopped to wonder why these winged creatures have abandoned wilder and more natural settings? What is it that draws them to the cement and bustle of urban regions? Food has been the key since the beginning of time.

The fact of the matter is, these animals are much more intelligent than we give them credit for. The answer to the above question is simple. It’s easier for pigeons to find food in big cities. But that’s not all. It’s also very easy for them to find refuge and ideal spots to make their nests.

What’s more, pigeons have clearly had no difficulty when it comes to adapting to the noise and chaos of city life. Therefore, you could say that these birds pigeons have adapted perfectly to human beings and their cities. And this is because, in the city, pigeons have easy access to everything they need in order to live.

Another question we have to ask ourselves is why so many people are so strongly opposed to pigeons. The truth is, we have so many things to worry about and get angry about these days. So why such strong feelings about this defenseless birds?

In his book The Global Pigeon, psychologist Colin Jerolmack provides an explanation. He says that the answer lies in the fact that humans detest what they cannot control. And pigeons seem to be winning the battle in that regard. If we take human beings off the list, these city-dwelling birds have no predators. What’s more, they reproduce at a rate that’s clearly gotten out of hand.

Just the same, big cities around the world are putting measures into place to try to moderate their population growth. These measures include everything from making it illegal to feed them, to capturing them, to feeding them birth control pills. Some cities have even introduced birds of prey to the area to act as natural predators. Only time will tell if humans and pigeons ever come to live in harmony in this beautiful and diverse planet.

Historical Roles That Animals Have Filled
Animals have fulfilled fundamental and historical roles for a long time. But there are also those that have made their mark against their wills. Read more »
Link copied!
Interesting Articles
Wild Animals
How Do Animals Protect Themselves from the Cold?