The Stag Beetle: The Biggest Beetle in Europe

The stag beetle has large, peculiar jaws which look like a deer's antlers, which is how it gets its name. 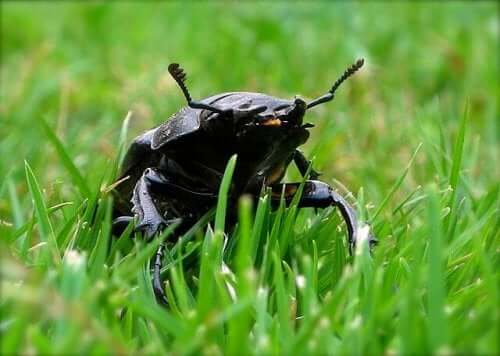 The stag beetle is a spectacular beetle that lives in Europe and parts of Asia. It has a very specific habitat and, as a result, is considered to be in moderate danger of extinction.

The stag beetle is the largest beetle in Europe. Males and females are different sizes and shapes, but the males are the most striking. Females can measure between an inch and two inches long, but males can reach nearly 4 inches, depending on the subspecies.

The males are easily recognizable because of their large jaws. They almost look like a deer’s antlers, and this is how it gets its name. The shape and color of these jaws can vary greatly depending not just on subspecies but also on the individual.

Females have these jaws too, but they’re much smaller than the males’. Because of their size, people originally assumed that only the males fought each other. However, it’s recently been discovered that females fight with each other too and there are even battles between the sexes.

Regarding the rest of their appearance, the stag beetle is dark in color with reddish patches. Like all beetles, they have three pairs of legs, a small head, and a large thorax.

Females lay their eggs in the bark of fallen trees or decaying wood, and these eggs will hatch two to four weeks later. The larvae feed and develop in the tree for between one and five years until they reach adulthood.

The larvae become adults during the fall but will hibernate until the spring. Most adult stag beetles go out between June and July, although you can see them from May through to September. After hibernation, an adult beetle will live for between one and four months.

These insects are the most active during the sunset hours, although you can easily see them at any time of the day. They’re only normally found in forested areas, particularly where there are oak trees, as these are their preferred habitat. It’s very rare that you’ll find them in an urban setting.

The males use their large jaws to fight during the mating season. Previously, males were believed to be territorial, but recent observations suggest that these struggles are only related to reproduction. The males will typically face each other in the branches of trees, and the fights end when one of the opponents falls to the ground.

The stag beetle lives in wooded areas where there are plenty of oaks or holm oaks, which are abundant across Europe and much of Southeast Asia. In the Iberian Peninsula, it’s quite rare to find them the further south you travel because there are barely any suitable forests for them.

It’s very rare to find a stag beetle in urban areas, particularly cities. This is because adults feed on tree sap or ripe fruit juice, and the larvae need a lot of decaying wood to survive.

As a result, deforestation and urbanization are leading to a reduction in the stag beetle’s natural habitat. Dead trees are removed, thereby removing a potential home for the larvae and other types of insects.

Because of this, the species is considered to be at moderate risk of extinction. At the moment, there isn’t too much concern, but the population is declining.

Because of the larvae’s insatiable appetite for decomposing wood, they’re considered to be a key part of forest health. Protecting forests from human interference is therefore essential for the survival of both the forest and the stag beetle itself.

Ladybird Beetle – Characteristics and Behavior
When we think of a ladybird beetle, we envision an insect with a blackhead and a red back with its characteristic black spots. Read more »
Link copied!
Interesting Articles
Invertebrates
6 Curious Defense Mechanisms in Insects