All About the Southern Right Whale Dolphin

The Southern Right Whale Dolphin is a difficult animal to observe, mainly because they're highly elusive and live at the south pole. They're black and white and lack a dorsal fin. 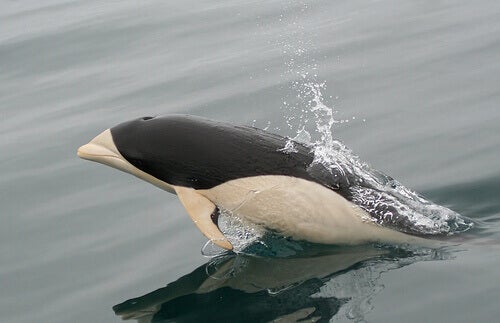 The Southern Right Whale Dolphin lives in the southern hemisphere, in the waters close to Antarctica. But this isn’t the most interesting fact about this creature. Read on to find out more!

The appearance of the Southern Right Whale Dolphin

The Southern Right Whale Dolphin is a carnivorous cetacean that lives in the most southern part of the oceans. It’s not easy to see them and we still don’t know very much about their lives or habits because they’re so fast and elusive.

We know that they’re about medium size for a dolphin, measuring between six and ten feet in length and weighing some 220 lb. They’re not much different in size from the Common Bottlenose Dolphin that you tend to see in photos or aquariums.

However, there is one feature that’s very different from other dolphins – they don’t have a dorsal fin. This is the fin that almost all cetaceans have on their back. They also have a short snout, a slightly smaller head, and their side fins are rounded.

The Southern Right Whale Dolphin has teeth and is a carnivorous mammal, feeding mainly on squid, fish, and octopus. Just like other cetaceans, they’re intelligent animals and can even hunt in groups.

They can live in both small and large groups, with some groups even reaching 1,000 individuals. But such large groups are not exclusively made up of these dolphins but also include other animals like Pilot Whales and other species of dolphins.

Each group has its own personality. Some groups are shy and flee any boat that tries to approach them, whilst others are more extrovert and will even approach a boat to play.

Because of their hydrodynamic shape, they’re one of the fastest dolphin species there are and have been recorded traveling at up to nearly 40 mph.

Because of their speed, they don’t tend to leap very high out of the water. They prefer instead to make long leaps without leaving the water by much.

In the southern hemisphere, we can find them in the coldest waters, with their natural habitat surrounding Antarctica. They also inhabit the areas around the coasts of Argentina, New Zealand, and South Africa.

In South America, you can see them from the Argentine coast, the Falkland Islands, and they sometimes even get as far as Chile. However, they tend to be shy and rarely approach the coast. Most sightings have been from whaling ships.

We don’t have enough data to estimate their population size, so we don’t know whether they’re at risk of extinction or not. Luckily, they don’t seem to have any great threats in their natural habitat.

Their natural predators are sharks and they’re rarely caught by humans. Sometimes, they can get tangled in fishing nets, and their meat is sometimes used as bait for crabs.

In any case, there are still efforts to protect them and they are included in a number of international treaties on the conservation of marine species. Once they have been studied more and we know how many of them there are, we will know if any special measures are necessary.

The Southern Right Whale Dolphin is unique as it is the only dolphin in the southern hemisphere without a dorsal fin. We have very little information about them or how many of them there are because they’re so shy. But they don’t seem to be in any immediate danger.

Four of the Most Common Animals of Antarctica
Today we'll tell you about some of the animals of Antarctica. As you may already know, this is the only continent that has no human settlements. Read more »
Link copied!
Interesting Articles
Mammals
Pikas or Whistle Rabbits: Habitat and Characteristics