Characteristics and Facts about Koalas

Here are some facts about koalas. These animals spend 90% of their lives in trees, sleep 18 hours a day and eat for about five hours every night. 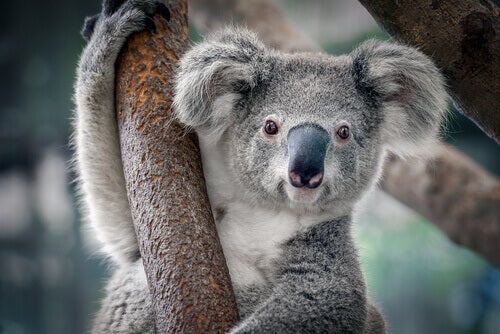 Today’s article will discuss some facts about koalas. Firstly, the scientific world knows them as Phascolarctos cinereus and they’re herbivorous marsupial mammals. These animals resemble small bears, although they’re not actually related to these animals. In fact, they’re close relatives of kangaroos and bats in spite of their extreme differences.

The koala’s body is egg-shaped and has no tail — a rather peculiar characteristic of this species. Their face is wide with large eyes and round, hairy ears.

In addition, this animal’s skin is mostly covered with matted hair ranging in color from grayish to chalky. However, they have a white patch on their back and their hips are usually of mixed color.

Koalas have one of the smallest mammal brains despite their large head size. They’ve retained many original features since their beginning as a species. This is precisely why specialists consider them primitive.

Koalas display a remarkable sexual dimorphism; it makes it easier to tell the males apart from the females. The former are usually longer than the latter and have a larger head and nose. In addition, their chest is broad and brown in color.

The females have an abdominal pouch (or marsupium), which plays a fundamental role in the rearing of their cubs.

These animals are native to Australia and one of the most characteristic and popular species in the oceanic-continent. The eucalyptus forests of the Australian continent comprise koalas’ natural habitat are popularly known as “rubber forests.”

Furthermore, they usually live in colonies constituted by multiple individuals but don’t really interact with one other. Every koala moves among the trees that comprise their territory and respect the boundaries of their peers so as to avoid fights.

Despite their gentle appearance, these animals are territorial and aren’t friendly. In fact, they won’t hesitate to engage in a fight or two or three to protect their territory. Also, they highly dislike humans. As you can imagine, they’re loners — besides the few opportunistic encounters with members of the opposite sex during mating season.

Facts and feeding habits of koalas

This animal is nocturnal and their diet is mainly based on eucalyptus leaves. Generally, they spend four to six hours a night eating. However, their metabolism is so slow that it takes them days to digest the food they consume.

Despite eating a large volume of leaves, the koala’s diet is quite low in calories. Thus, their reduced metabolism can conserve large amounts of energy. An adult animal can sleep up to 18 hours per day, mainly during hot weather.

They use the energy to move through the trees, mark territory, and get food. Furthermore, they assert their dominance over the trees around them through slow moves and also leave their scents and scratches on them.

Estimates indicate that koalas spend about 90% of their life high up in the trees. Unlike monkeys and other species, this animal doesn’t swing from tree branches. Their powerful claws allow them to easily cling to trees and climb them.

Facts and reproduction of koalas

Koala gestation lasts about 34 days. Given they’re marsupial mammals, their cubs begin to develop in the womb and then move to the mother’s abdominal pouch. Newborn koalas are small, hairless, earless, and with their eyes shut.

Baby koalas live in the marsupium and feed only on their mother’s milk during their first six months. Their natural curiosity leads them to stick their heads out to recognize their environment from their fourth month of life.

The youngster is ready to go out into the external environment when it’s seven months old and is ready for an independent life. Koalas live between 10 and 13 years in the wild — females live longer than males though.

The Koala is a Master at Adapting to the Environment
Among some of the many curious facts about the koala, its particular diet stands out, as it only eats eucalyptus leaves. Read on! Read more »
Link copied!
Interesting Articles
Mammals
What Are the Differences Between Jaguars and Leopards?