Curious Habits of the Platypus

The platypus is an animal whose morphology is a hybrid between a bird and a rodent. However, it’s also a mammal, because it suckles its young, and oviparous, because it lays eggs, at the same time. In this article, discover the curious habits of the platypus. 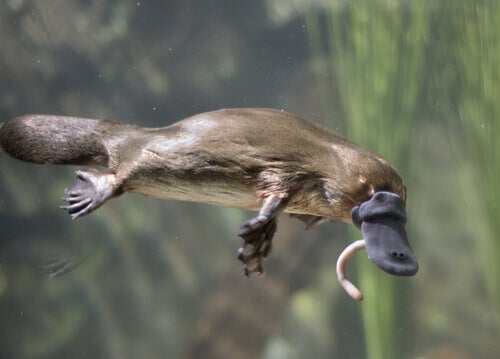 Do you know much about the platypus? Many people have come to love it, while others completely reject it. This is because it’s definitely one of the animals that you either like or can’t even stand to see. We find it very funny and special, and that’s why we wanted you to know more about it. Do you want to discover the habits of the platypus and more details about this animal? Then read on!

The platypus, a very special animal

Before delving into the topic of this article, we decided to talk a little more about the physical characteristics of this animal. When experts discovered it a few decades ago, we were all so surprised! Some people were pleased and others weren’t, but no one remained indifferent to this animal. This isn’t surprising, as the platypus is a very puzzling and different animal.

Its body is like that of a squirrel, its legs and beak like those of a duck, and its tail like a beaver tail! Can you think of a more unique animal? We don’t know what you think, but it definitely seems interesting to us.

What we also know is that this small animal has become so special and popular that there are even cartoons and comics about it. Yes, many people know about its appearance, but how about its character? What are the habits of the platypus? Today, we reveal all its secrets! Keep reading so you don’t miss out!

Discover the curious habits of the platypus

One of the most peculiar things about this animal is that, although it’s terrestrial, it can also go into the water. And it lays eggs as well! Although it looks like a mammal due to its squirrel body and beaver tail, we could also say that it’s an amphibian.

Despite this, it feeds its young with milk that comes out of the pores of its skin when they hatch. It seems that everything regarding this animal is quite different. You’ll discover some of its habits below.

The platypus doesn’t need to bathe, as it almost obsessively grooms itself. Every time it comes out of the water, it starts combing its hair with its back claws, which it can do thanks to a joint present in its hips, as well as its incredible flexibility. And it doesn’t do so lightly. In fact, it can spend several minutes on the same activity.

It gets lost all the time, one of the curious habits of the platypus

When a platypus goes too far into the water, it gets lost, since its vision isn’t 180 degrees like ours. In fact, it can only see sideways and upwards, never from the front. Who could find their way back home only looking at the sky? We can’t blame it, poor thing.

Surely you’re amazed by this animal and would definitely consider playing with one if you saw it. But watch out! Although it’s rare for mammals to be poisonous, the platypus is. But this is barely surprising, as nothing is what it seems with this animal.

On its hind legs, it has a kind of spur in which the venom accumulates. In fact, this animal can deliver its venom with a single blow. This animal uses the venom to defend itself against predators, since it’s an attractive prey for them.

The incubation process takes about ten days, during which time the female leaves the nest only to relieve and groom herself! We already told you that the platypus is basically obsessed with grooming!

What did you think about the curious habits of the platypus? We’re sure that, when you see one, you’ll remember what we told you about it!

Five Poisonous Animals that Don’t Seem to Be
There's so much we don't know about the animal kingdom. In this article, we'll tell you about five surprising poisonous animals. Read more »
Link copied!
Interesting Articles
Mammals
The Elephant Seal, a Lifetime in the Cold