Even though humans belong to the same class as orangutans and dogs, we don't have the same types of mammalian limbs. 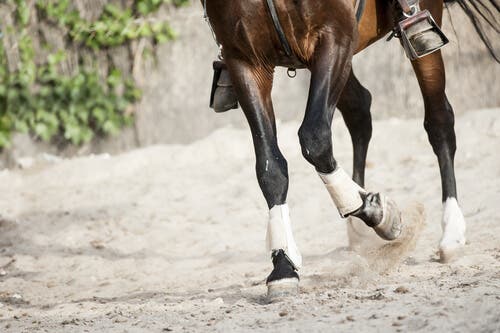 The legs and paws of every animal are all different. This is because each species must adapt to specific habitats, and our needs vary too. For instance, humans are mammals, just like orangutans and dogs, but we don’t have the same external organs. Continue reading as we’re about to tell you what the different types of mammalian limbs are.

These appendages fulfill different functions: locomotion, object manipulation, support, etc. These are some of the types of mammalian limbs:

The vast majority of this class of animals live on land, but their limbs aren’t the same. Many of the four-legged ones have adapted their front and rear legs to be able to run (lions, wolves, tigers) or jump (hares, kangaroos, rabbits) and then there are some that fulfill both functions as is the case of the gazelle.

The limbs are long and strong in all these cases, and they can move them into different positions thanks to tendons. In addition, these limbs support the weight of an animal and can move at varying speeds, depending on the need.

Also, within the terrestrial mammals, there are species whose legs end in hooves. Sheep, goats, cows, and camels have an even number of hooves. But horses, rhinos, tapirs, and donkeys have an odd number.

There are also the plantigrades (bears, human beings, kangaroos),  which use the entire sole of the foot when they walk. Also, there are the digitigrades (wolves, dogs, cats) who only touch the ground with their fingers/toes. Finally, there are the ungulates (goats and donkeys) who support themselves only on the ends of their toes.

Dolphins, whales, and manatees are some of the examples of marine mammals whose limbs are fins. The exception to this rule is the otter, which has special legs to move in rivers and lakes.

The fins of cetaceans allow them to swim and easily move in the water. However, unlike terrestrial species, their arms and legs have a minor role in displacement: the tail fin, which is its “modified tail,” is responsible for this.

The mole is the main example here. Their hands changed throughout the evolution of the species to be able to dig in order to build their lair or quickly escape from predators.

Mole paws are endowed with rather powerful claws, which also allow them to hold onto objects such as tree branches or stones.

The animals that live in forests and spend many hours among the trees have special limbs. Chimpanzees, gorillas, lemurs, and marmosets – among other primates – can hang on the branches and turn upside down, eat and grab objects, and even remove parasites from their young thanks to their external organs.

Similarly, mandrill and other terrestrial primates have limbs that allow them to walk with their hands on the ground – they have very long arms – and hang on the branches whenever they need to.

One of the main characteristics of this family – one we also share – is that they have opposable thumbs.r fingers. This arrangement allows us and them to grasp objects and manipulate them.

Finally, we must talk about mammals that have modified their front legs to be able to fly. This is the case with bats and flying lemurs.

In addition, the transformation in these cases was as follows: the skin of the abdomen and back was extended and the fingers lengthened. This is how they can spread their wings and move through the air despite the fact they’re not birds.

The Animals with the Strongest Jaws
Most people know that some animals are more dangerous than others. We'll tell you all about animals with the strongest jaws - making them very dangerous! Read more »
Link copied!
Interesting Articles
Mammals
What Are the Differences Between Jaguars and Leopards?