Types of Squirrels and Their Characteristics

These rodents stand out for how cute they, as well as their remarkable agility and dexterity when climbing trees and moving from one branch to another. Their slim, light physique allows them to gain speed quickly. Their striking tail is not mere decoration, but rather a stabilizing force. 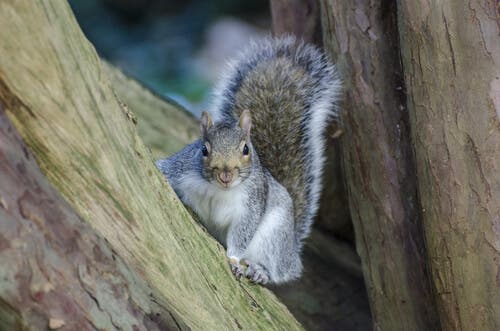 Squirrels are so sweet that they even managed to conquer the big screen. Few people know this, but we use the term “squirrel” to cover various species of these beautiful rodents. Next, we’ll look at different types of squirrels, their main characteristics, and their natural habitat.

Squirrels are small rodent mammals that belong to the Sciuridae family. This family includes about 500 species. In fact, there are squirrels on all continents, except for Australia and Antarctica. These animals are strong and resistant. In addition, their bodies are prepared to survive changes and climatic adversities.

These rodents are medium in size with an average height of 12 inches. They also have abundant brown or red fur. Their bodies are light and thin, which allows them to gain speed without losing their dexterity. In addition, they also have very strong legs to scratch the ground and collect fruits and seeds.

However, one of their most outstanding physical characteristics is their striking long tail. This is covered by voluptuous fur that gives the tail a “fluffy” appearance. In fact, the tail of an adult squirrel is almost the same length as its body, being about 10 inches long.

This tail actually plays a fundamental role in squirrel’s daily life. Its main function is to allow these rodents to stabilize themselves both in motion and at rest. In addition, it also helps them to improve their speed and agility. It also helps optimize jumps between trees.

Types of squirrels: The four most popular species

The red squirrel, also known as the Eurasian red squirrel, lives mostly in the forests of Europe. These squirrels have elongated light bodies, and measure between 8 and 12 inches. They also weigh between 18 to 36 grams. These animals also have very long tails with the characteristic fluffy fur. However, their fur is all a beautiful reddish color, which stands out and explains its name.

This species also stands out for their excellent sense of sight. They are even able to see while diving under cold water. The red squirrel has an omnivorous diet that mainly consists of seeds, sprouts, pine nuts, buds, and red fruits. However, when food is scarce, these squirrels may also consume small invertebrate animals.

Red squirrels don’t hibernate. However, they do keep the habit of storing food before the arrival of winter. This way they can guarantee that they’ll have enough food during this time and can save energy to maintain their body temperatures.

Currently, experts classify this squirrel as “least concerning” in terms of any danger of extinction. However, originally there were more than 40 subspecies of red squirrels across Europe. Now, there are only 23 of the 40 subspecies in those forests.

You might be surprised, but these little creatures are actually striped squirrels. In fact, they’re one of the most popular species and many people feature them in stories or children’s movies. These animals mainly live in the forests of North America.

This species is smaller and more robust than red squirrels. They measure 5.5 to 7.5 inches, and weigh an average of 3.5 ounces. These little creatures usually have black and cream-colored stripes that are interspersed with one another. They also have pointed skulls and small, rounded ears.

Chipmunks are one of the types of squirrels that hibernate for a long time. In fact, they “sleep” from October to April. Outside these months, they have daytime habits and live mostly on the ground. However, they do climb trees to find food. Chipmunks also make little caves in the ground that they use partially to store food.

Also known as common chipmunks, this species is native to China, Japan, Korea, and central Russia. However, this species has spread throughout most of Europe after some specimens escaped for captivity.

Siberian chipmunks have white and dark black or brown stripes on their backs. Their bodies measure 7 to 10 inches and weigh between 2 to 5 ounces.

These animals are also diurnal and spend long hours on the ground. However, they eventually climb trees to feed. They’re solitary animals that usually mate only when winter arrives. Their diet is primarily based on fruits, berries, seeds, bushes, and small animals.

These squirrels stand out for being very sociable. In fact, they almost always live in groups or pairs. For this reason, many people in various countries have adopted them as pets. However, they need a lot of care to keep them in good health.

They’re robust squirrels that measure between 10 to 12 inches and have a body weight of 15 to 35 ounces. This animal has abundant fur in different shades of brown and a long tail. However, one of their most famous characteristics is the habit of storing food in their cheeks.