These five hoofed animals move by walking only on their toes, which, in this case, are covered by a hoof. Find out more! 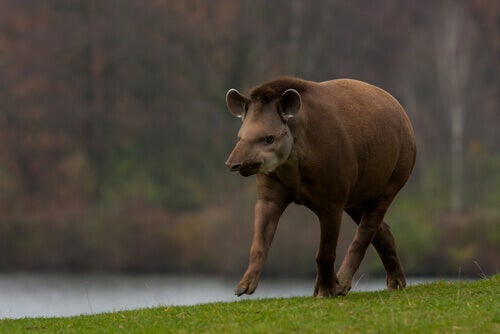 Hoofed animals, or ungulates, are mammals that only use the end of their toes to walk and whose feet are covered by a hoof. Would you like to know more about them? In this article, we’ll tell you.

The characteristics common to this group of mammals are, for example, that they live almost everywhere in the world. They’re both wild and domesticated and are mostly herbivores (only some are omnivores). What’s more, they walk on their toes and their feet are covered by a kind of hoof. Some examples of ungulate animals are:

The tapir family, made up of five subspecies, is related to horses and rhinoceroses. Therefore, they seem to have been a ‘combination’ of both animals. Their main characteristic is its elongated snout, which allows it to pull up roots, leaves, and grasses for food, and to drink water.

The tapir has a compact body, short legs with four toes on the hind limbs, and three on the forelimbs. Their fur is usually short, dark and, in some cases, with different colored ‘patterns’. For example, the Malayan tapir is black on its head, legs, neck, chest, and tail, but white on the back and belly.

Also known as Iberian ibex, it’s a bovid that lives in Europe, specifically in mountain ranges and rocky ecosystems. They can survive in these places thanks to their feet and toes, covered by hooves, which allow them to climb among rocks, even on steep slopes.


This species shows great sexual dimorphism, as the male is larger and has antlers three times longer than those of the females. In addition, they have a ‘beard’ under the jaw and a more elongated face. The coat depends on geographic location and time of year. It can be grayish and long in winter, and brownish and short in summer.

This is another of the ungulate animals on this list, known for its two humps and its ability to not drink water for weeks at a time. This camel is related to the dromedary or Arabian camel and lives mainly in southern Asia.


It has short limbs in comparison to its ‘relative’ and they end in a strong hoof which enables them to walk in the sand without getting burned. The color of the fur is dark brown and it’s longer around the humps, neck, and head. Thanks to their fur, they can protect themselves from the sun, the heat of the day, and the low temperatures of the night.

Both the African and Asian species are hoofed animals and are in danger of extinction. As for the domestic donkey, it also has hoofed limbs and a toed gait.

The donkey belongs to the equine family. It’s a very strong animal, short in stature, with short legs (with stripes like zebras or black), long ears, and a small mane on the nape of the neck. The coat can vary between gray and brown or black, with the belly a little lighter than the mantle.

Finally, another of the best-known ungulate animals – pigs. They can be domestic or wild and have short legs ending in two hooves, a kinky tail, and a robust body.


Pigs are omnivores (i.e. they can eat meat as well as vegetables, fruits, or seeds) and currently live almost everywhere in the world, except for very cold areas such as Antarctica.

Their size may vary according to the subspecies; the smallest is the Vietnamese, which is often chosen as an exotic pet. As for the fur, it can be pink, brown, or black. Since they don’t have sweat glands, they must wet their bodies with water or mud to cool themselves.

What You Should Know About the Zebra
The zebra has never been domesticated because it’s always tried to avoid its predators. This animal is a true survivor. Read on! Read more »
Link copied!
Interesting Articles
Mammals
What Are the Differences Between Jaguars and Leopards?