The differences between the different elephant species are centered on the shape of their body, skin, head, tusks, trunk, ears, and legs. Read on to learn more! 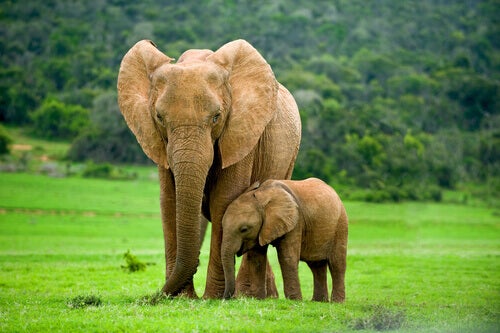 Many people are unaware that there are different elephant species. In fact, many mistakenly believe that only the African elephant exists. However, this specimen has a relative in Asia, and both share the unfortunate fact that they’re endangered.

The African elephant, the star of many stories, documentaries, and photos, isn’t alone in the world! The African and Asian elephants have many important differences, such as their size. Regarding their intelligence, experts haven’t observed any big differences.

In this sense, we can classify two types of elephants, among other things, by their size. The Asian elephant stands out for the shape of its head and ears. Although these two elephant species may seem quite similar, the African elephant is usually larger than its Asian counterpart.

The differences between the African and Asian elephants

The main characteristic that differentiates the African elephant from the Asian elephant is its size. In this regard, the former is usually a lot bigger and heavier. In fact, these elephants are usually 10 feet high by 22 feet long. As for weight, it usually ranges between 10,300 and 13,300 pounds.

The Asian elephant measures an average of 9 feet high by 20 feet long. Regarding its weight, it’s usually about 11,000 pounds. Thus, the African elephant is the biggest land mammal in the world.

Although these two elephant species look almost the same at first glance, several subtle differences reveal their origin. In this regard, the Asian specimen has a convex back, with the highest point in the center, unlike its African counterpart, whose highest point is on the spine.

It may surprise you that the skin is another differentiating feature between these two species. The skin of the African elephant is considerably more wrinkled and a lot thicker than the skin of the Asian elephant.

Although both elephants belong to the same species, they also have genetic differences. In fact, these differences are so significant that it’s almost impossible for a cross between these two species to occur or to see them together in a herd.

The trunk of both elephants looks the same. However, the trunk of the Asian elephant has a single upper lobe. This is in contrast to the African elephant which has two lobes: one at the top and one at the bottom.

We should note that, in addition to their size, the ears are another of the most differentiating features between these elephant species.

The specimens from Asia, and particularly from India, have much shorter and more rounded ears than African ones. In fact, the latter have such large ears that they completely cover the shoulder area.

The difference between the ears of both species is mainly due to the climate. In this sense, the ears play a fundamental role in temperature regulation. Therefore, it isn’t hard to understand why African elephants have bigger ears, since the temperatures in Africa are much more extreme.

After getting to know the main characteristics of these great animals, it’s easier to tell them apart. Without a doubt, size is one of the most important factors and the easiest to observe.

The Massacre of 100 African Elephants in Botswana
One of the worst incidences of poaching of African elephants has been confirmed: the deaths of 100 elephants in Botswana. Read more »
Link copied!
Interesting Articles
Mammals
What Are the Differences Between Jaguars and Leopards?