There are some animals, native to other countries, that we don’t know much about. To get a little closer to this fascinating creature, we’re going to take a closer look at its social structure. 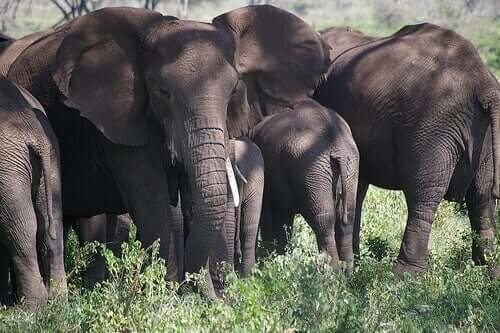 Examining the social structures of elephant herds is very interesting, which is why many researchers are amazed by it. Let’s see why.

The social structure of elephant herds

The social structure of elephants is very complex and quite different from other animal herds. For example, males live in one herd while females live in another.

Females live in the same herd all their lives, therefore they form close bonds with all their closest relatives. They’re also very social animals, and it’s not uncommon to see them playing with each other.

Females are not only social with each other, but also with others outside their herd, including males. When a female joins a male herd, she’s welcomed and is allowed to stay for a while without problems.

This happens when a member of the herd wants to leave the group and venture out on her own. If she ever wants to return, she’ll be welcomed back. An elephant’s memory is astounding. They remember and recognize who belongs to their herd and who doesn’t.

Males aren’t as social as females, and prefer to live in isolation. They’re known to form single herds. They only tend to socialize when they want a partner and, once they get one, they return to their herd. The older ones tend to go around the edges while the younger ones are in the middle as a symbol of protection.

It’s fairly common for male elephants to leave the herd for a couple of days and then return. Every time they leave, they leave for a little longer. When they reach approximately 14 years of age they no longer return to the herd.

One of the reasons this happens is because herd leadership is a constant struggle all the time. That’s why those who don’t succeed prefer to venture out on their own.

There are many other curiosities surrounding elephants that attract our attention. For example:

We hope that we’ve provided you with enough information about this fascinating animal that intrigues many and surprises others.

The Elephant: Characteristics, Behavior, and Habitat
Did you know that the elephant is an animal that groups itself into matriarchal families? In this article, we share more interesting facts. Read more »
Link copied!
Interesting Articles
Mammals
What Are the Differences Between Jaguars and Leopards?