How Do Marine Mammals Sleep?

The answer to whether marine mammals sleep or not is yes. But perhaps the way they do so will come as a surprise to you. 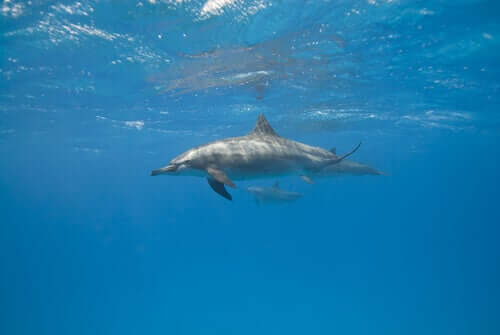 Timely rest and sleeping are necessary for all creatures in nature, not only for human beings, as we often tend to think. Yet, in the case of marine mammals, these processes are somewhat different and, without a doubt, surprising. So, here are more details about how many marine mammals sleep.

This group of animals comprises about 130 different species. All of them are more or less adapted to aquatic life. They all have hydrodynamic bodies and adapted limbs that facilitate movement inside the water, in most cases.

In general, there are three large groups of marine mammals:

Answering this question in its entirety is still difficult. To begin with, sleeping is a physiological state as well as a necessity. Sleeping helps to balance some internal physical and psychic processes, which is why it’s vitally important to all creatures.

There are four stages of sleep:

All sorts of things happen over the course of these stages. Voluntary movement and muscular activity decrease until it shuts off. This means the muscles relax completely, and brain activity alters.

OK, so how do marine mammals sleep?

To solve the problem of movement, many species of aquatic mammals resort to the so-called unihemispheric sleep. Perhaps this long word means that while a part of a brain is “sleeping” the remaining hemisphere is responsible for remaining active and therefore alert.

It’s worth noting that this type of sleep isn’t only exclusive to marine animals. Quite the contrary since it also occurs in birds and some reptilian species. Scientific researchers observed that the hemispheres activate and deactivate alternately. So, both sides of the brain rest in equal measure.

This mechanism assumes that marine mammals can continue to breathe, for example. Breathing in earth mammals is an involuntary process. On the contrary, it’s completely voluntary in cetaceans. So, the solution is to resort to the active part of the brain when they sleep, to ensure that the breathing process continues.

The unihemispheric slow-wave sleep (USWS) also allows marine mammals to swim and keep moving. This way, in addition to maintaining their position, it helps them with the task of ascending to the surface to breathe. This phenomenon also helps them maintain their optimal body temperature.

Interesting facts about the sleeping process in marine mammals

Recently, part of the science behind the phenomenon of sleeping was discovered in these types of animals. It has to do with a component closely linked to the brain called acetylcholine.

The results, published in a prestigious scientific journal, suggest that this compound resides in high concentrations in the active side of the brain. Likewise, there’s hardly any in the sleeping side of it.

As a final interesting fact, let’s not forget to mention the sleeping process of dolphins. They are one of the marine mammals with unihemispheric slow-wave sleep, and are a delight to watch as they sleep with one open eye. They alternate from eye to eye according to the hemisphere of the brain that’s active at any given moment. It allows them to see what is going on around them. Also to remain alert against any potential danger.

Cetacean Species and Their Classification
Over the years, many scientists have dedicated themselves to the study and classification of cetacean species. Learn all about them in this article. Read more »
Link copied!
Interesting Articles
Mammals
The Role of the Gray Squirrel in Forests