When it comes to how dolphins sleep, keep in mind that they need to go to the surface to breathe, which doesn't seem compatible with sleeping. However, it actually is... 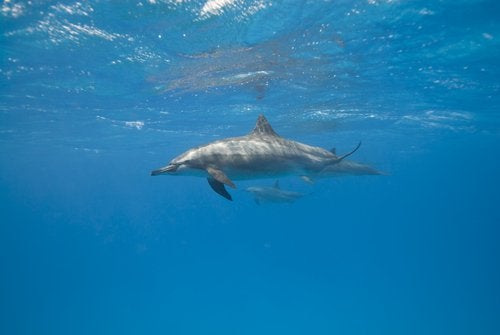 Dolphins spend all their time in the water, but they have to go to the surface to breathe. So how do dolphins sleep? In this article, we’ll tell you all about the sleep habits of cetaceans and other marine mammals.

How do dolphins sleep?

Dolphins, like whales or orcas, have to sleep with one eye open…and half of their brain remains awake. Yes, you read that correctly!

These marine mammals experience what is known as “unihemispheric slow wave sleep“. This means that, when resting, only one of the brain’s hemispheres loses consciousness. The other half remains awake.

The same goes for the eyes. Since one closes – the one opposite to the half that is turned off – the other eye stays open. The brain hemisphere that doesn’t rest is responsible for monitoring breathing, so that the dolphin will go to the surface to breathe when needed. In a 24-hour period, each cerebral hemisphere rests for four hours. Therefore, the dolphin sleeps eight hours per day.

Sometimes, dolphins float motionless near the surface while they “sleep”, and at other times, they swim very slowly. They can also go deeper to the bottom of the ocean, and then go up to breathe every so often. Since they aren’t active, they don’t need to breathe so often.

Why do dolphins sleep that way?

There’s a popular saying that goes, “Nature is wise.” Nothing is random, and each species is endowed with what it needs to survive. This, of course, includes dolphins, who can sleep without drowning.

Unlike terrestrial mammals, sea mammals don’t deactivate their brains completely while resting, nor their muscles. They can’t afford to relax and sleep deeply, as they need to breathe at the surface. If they did, they wouldn’t be able to inhale the oxygen they need.

However, on top of that, another important thing is that they don’t deactivate any of their senses, not even their sense of sight or smell, as land animals do.

Another reason why dolphins sleep with one eye and half their brain on alert is so that they can pay attention to possible dangers around them, such as fishing boats, sharks, or orcas.

In addition, they are able to maintain certain physiological processes all day long, like the muscular movements necessary for preserving body temperature while in the water. While they tend to live in tropical climates and are warm-blooded, their body temperature can drop if they stay still. That could harm their health.

Something similar happens with big sea animals like whales and orcas. They also need to go to the surface to breathe. This means that they swim slowly, and very close to the ocean’s surface, thanks to the fact that one half of their brain is awake.

Another interesting fact about whales’ sleep cycles is that when they are small (calves), they rest, eat, and sleep with their mother, who never stops swimming for a minute.

The calf stays in a such a position that the movements that its mother makes allow it to propel itself along. In this way, it can sleep most of the time, without drowning or sinking.

It’s really fascinating to discover how dolphins and other marine animals sleep. With this “technique” of having half of their brains awake, they ensure their survival and avoid danger.

The Amazon Pink River Dolphin: A Fascinating Creature
The Amazon pink river dolphin is a fascinating creature that has inspired many myths, along with being one of the few kinds of dolphin that lives in rivers. Read more »